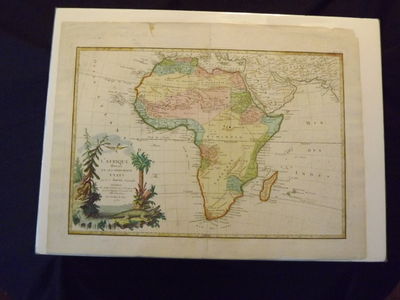 by Janvier, Sieur Jean.
Engraved, hand colored, decorative cartouche, ample margins, 43.7 x 30 cm (17 1/2" x 12"). Minor aging and slight browning; otherwise very good, bright and with a strong impression. Janivier was a French geographer that was active in the second half of the 18th century. According to Norwich and Tooley, Janivier produced a series of maps in 1760, and collaborated in an Atlas Moderne in 1762 and 1771.The present map is number 28 from that atlas. This rather handsome engraved map, which has full color, appears to present the cartographic knowledge of Africa in the mid 18th century. The map is fairly accurate, and shows the only settlements in southern Africa, and also features a few Hottentot tribes. The cartouche, which is in the lower left part of the map, shows a few tress, a leopard stalking, and a crocodile near the bottom. Norwich 104. Tooley p. 59. (Inventory #: 101240)
$600.00 add to cart Available from
Nicholas D. Riccio, Rare Books
Share this item
Nicholas D. Riccio Rare Books & Prints
Offered by