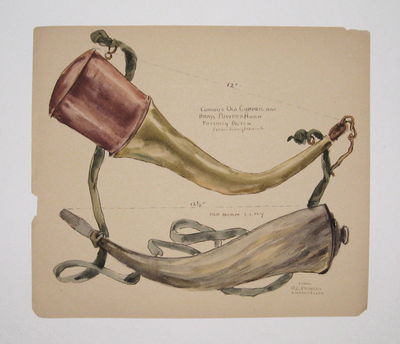 by BEARD, Daniel Carter
1892, 1892. Watercolor drawing on paper. Image measures 7 1/2" x 8 3/7". This original watercolor drawing depicts a copper and brass powderhorn, possibly Dutch, and an old horn from the collection of Daniel C. Beard. The drawing dates from 1892, when Beard worked as an illustrator for books by Mark Twain, Ernest Crosby, and others. The choice of subject matter no doubt relates both to his early career as an engineer and surveyor, as well as to his later dedication to the pioneering spirit through his involvement with the Boy Scouts of America. This original drawing is in good condition with minor chipping on the edges. Daniel Carter Beard (1850-1941) was an American illustrator, author, youth leader, and social reformer. In 1905, he founded the Sons of Daniel Boone, a youth organization that taught American frontier traditions and skills to young boys. In 1910, he merged his organization with the Boy Scouts of America and became actively involved in the Scouts and other youth organizations. (Inventory #: 232955)
$450.00 add to cart or Buy Direct from
Argosy Book Store
Share this item

Philadelphia : C. P. Wayne , 1807
(click for more details about A Plan of New York Island, Part of Long Island &c. Showing the Position of the American and British Armies, before, at, and after the Engagement on the Heights, August 27th, 1776)
View all from this seller>