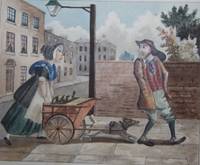 by Thorp, William
1830s. Full Morocco. Fine. All the imagery and verse in this manuscript album was done by one accomplished hand -- that of William Thorp. The pencil and watercolor sketches and drawings are delightful, whether depicting architectural detail, landscape, animal or human subjects. There are 26 pages of illustrations, many dated between 1832 and 1836. Twenty are black and white, six in color. Architecture is the most prevalent subject, with much drawn from rural England. Perhaps the most winsome illustration, though, is humorous depiction of a confrontation between a man and woman on an English street. The verse, also, is more than competent in a typical Victorian vein. The album is cased in an elaborately blindstamped ornamented black Morocco. The binding is rubbed along the edges. The joints have had an utilitarian repair. The tissue guards remaining are foxed, and some soiling of the leaves proper as well. Endpapers are pasted to one another by the hinges. A few illustrated leaves are defaced a little by probably later color transfer imagery. (Inventory #: 001916)
$600.00 add to cart Available from
White Fox Rare Books & Antiques
Share this item
White Fox Rare Books and Antiques
Offered by