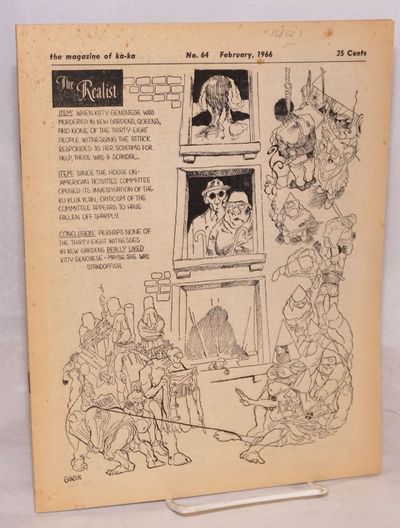 by Krassner, Paul, editor
New York: The Realist, 1966. 32p., newsprint self-wraps 11 x 8.5 inches, somewhat browned with slight foxing on front page but otherwise very good. The centerfold this issue is an assemblage of drugs-in-the-military jokes called "Junkie battalion." Another cartoon shows Barry Goldwater imolating himself in support of LBJ's Vietnam policy.// Letter section acknowledges as a hoax Lenny Bruce obituary from previous issue (note that the sender of this letter, Jules Feiffer, is lodging a complaint about the parody of HIM), also a letter from Paul Jacobs chortling over HIS previous-issue hoax on ghetto humor, in which he had cited a text from the non-existant Journal of American Poverty.// Lastly (not last of contents, but last we shall particularize) the "Conspiracy Corner" column (by Art Steuer) outlines circumstances that could make one consider Adlai Stevenson's heart attack a murder (he was about to spill, about Vietnam). (Inventory #: 158623)
$12.00 add to cart or Buy Direct from Bolerium Books
Share this item