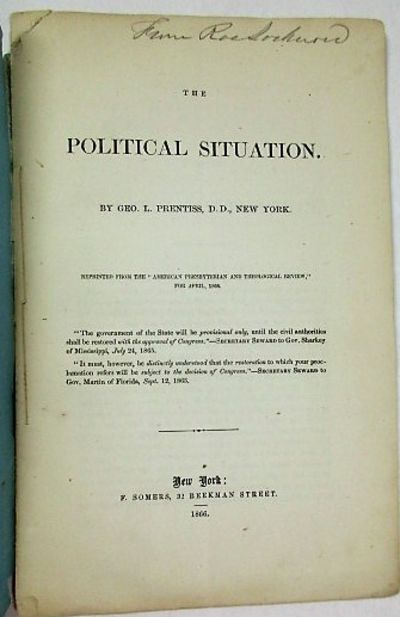 by Prentiss, Geo. L.
New York: Printed by F. Somers, 1866. Original printed wrappers, stitched, 39pp + final blank. Shallow corner chips, Good+. Reprinted from the American Presbyterian Review for 1866, this pamphlet is a window on Reconstruction. Prentiss was intelligent and insightful, and brother of the renowned Mississippi lawyer Sargent Smith Prentiss. Before the War "the champions of slavery not only gained complete possession of political power and opinion at the South, but they succeeded in spreading their servile and fatal doctrines broadcast over the North, and engrafting them upon the whole policy of the nation." Prentiss lauds Congress and "our martyred President" for "the Great Amendment" barring slavery. President Johnson, after "the painful scene in the Senate Chamber, on the 4th of March"-- when, drunk, he took the oath of office as Vice President-- has erred in seeking to reconstruct the fallen States "at once," without Congress's participation; his policies have suffered from "human infirmities and prejudice, which would be here out of place and not in keeping with the conciliatory and pacific aim of this discussion." Prentiss dissects the "monstrous anomaly" of returning the South to political power without adequate protections-- for the freedmen, and against the entrenched elite who caused the War in the first place. FIRST EDITION. Sabin 65093n. Not in Work, LCP, Blockson, Eberstadt, Decker, Bartlett. (Inventory #: 10639)
$350.00 add to cart or Buy Direct from
David M. Lesser, Fine Antiquarian
Share this item
David M. Lesser, Fine Antiquarian Books LLC
Offered by