LETTER OF HON. WILEY P. HARRIS, TO COLONEL J.F.H. CLAIBORNE, OF MISSISSIPPI, ON FOREIGN IMMIGRATION, THE NATURALIZATION LAWS, AND THE SECRET ORDER OF KNOW-NOTHINGS 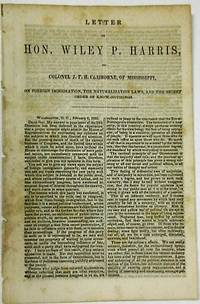 by Harris, Wiley P.
[Washington: Office of the Congressional Globe, 1855. 8pp, disbound, caption title [as issued], printed in double columns. Some loosening and light foxing, else Very Good. The Mississippi Congressman makes his position crystal clear on the increasingly powerful American, or Know-Nothing Party, whose anti-Catholic, anti-immigration message attracted support from Whigs and Democrats. It would field its own presidential candidate, former president Millard Fillmore, in the upcoming presidential election. Harris says the Know-Nothings are "a secret political brotherhood, whose purposes, names and numbers are hidden from the public eye." Observing that Know Nothings loathe the southern planter class as well as Catholic immigrants, Harris says they have "sided with ultra anti-slavery men...They have imparted a deeper shade to Abolitionism." He warns that Know Nothings subscribe to "secret oaths" that they hold more dear than the oath to support the Constitution. FIRST EDITION. Not in Sabin, Eberstadt, Decker, Owen, LCP. OCLC 11631750 [7] as of May 2019. (Inventory #: 17978)
$350.00 add to cart or Buy Direct from
David M. Lesser, Fine Antiquarian
Share this item
David M. Lesser, Fine Antiquarian Books LLC
Offered by