Once Upon a Time... Maimonides. Traditional Hebrew Tales. An Anthology. Translated from Spanish and Hebrew by Rhoda Henelde Abecasis 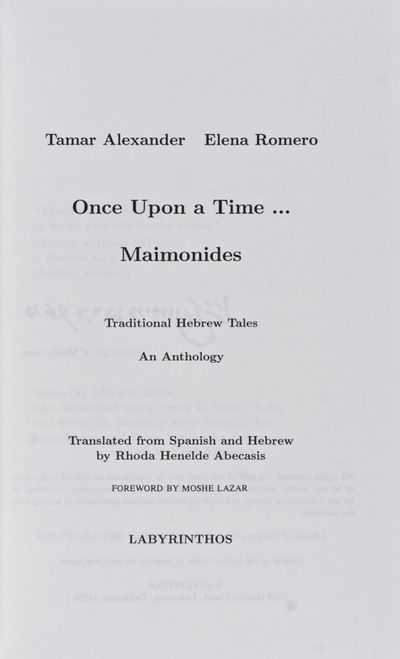 by Alexander, Tamar; Elena Romero (ed.)
Lancaster, CA: Labyrinthos, 2004. First edition. Hardcover. vg. 8vo. [8], 380 pp. Original grey cloth with red lettering on front cover and spine. Photographic frontispiece of Henry J. Leir. Eighth volume in the "Henry J. Leir Library of Sephardica: Text and Studies" series. A collection of folktales about Rabbi Moshe ben Maimon, also known as the Rambam, divided into ten thematic sections, with an analytical introduction and various typology and bibliographic notes at the rear, together with a series of comprehensive indices, including geographic origins and narrative types and motifs. An English translation (published to commemorate the 800th anniversary of Maimonides' death) of the 1985 Spanish edition by Tamar Alexander and Elene Romero (published on the occasion of the 850th anniversary of his birth in Cordoba). Accompanied with a foreword by Moshe Lazar. Illustrated with b/w photographic reproductions. Fine condition. R. Moses Maimonides (Rambam) was a 12th century Jewish philosopher and halachic legal scholar. A highly controversial figure, both during his lifetime and after his death, but generally acknowledged as the preeminent Jewish thinker of the Middle Ages. He was born in Córdoba, Spain but fled as a child due to Almohad persecution of Jews. He eventually settled in Egypt where he served as a rabbi, physician and philosopher. His fourteen-volume Mishneh Torah, his only work not in Arabic, still carries canonical authority, particularly within the Yemenite Jewish community, as the codification of Talmudic law. His other work includes a commentary on the Mishnah entitled Kitab al-Siraj, Kitab al-Fara'I, a book on precepts, and the philosophical work Dalalat al-Ha'irin, known in Hebrew as the Moreh Nevukhim, The Guide to the Perplexed. The major premise is an attempted philosophical/theological reconciliation of the Hebrew Bible and Greek knowledge and explaining away anthropomorphic and antropopathic terms in the Bible. This work came to play a central role in all subsequent major controversies over philosophy within the Jewish community during the Middle Ages. (Inventory #: 27131)
$65.00 add to cart or Buy Direct from
Eric Chaim Kline Bookseller
Share this item