Art Deco Fashion Sketchbooks, Four in All, with an additional canvas 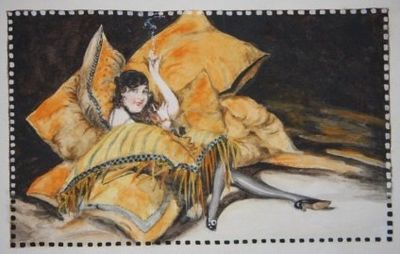 by Ernest
1915-1919. Containing a total of 80 original watercolors, 43 of which are pure fashion plates straight out of the wardrobe for "Downton Abbey". The fashions and aesthetic are very much of the teens and World War One era when what is known as Art Nouveau was evolving into the more angular, more abstract, more brittle, more self-consciously "Modern", of Art Deco. We can still see and enjoy the lavish and extravagant rococo flourishes of Art Nouveau while also finding traces of the streamlined looks associated with the twenties. The style of illustrations resembles that we find in "Gazette du Bon Ton", the highly sought-after French fashion magazine of the day, and we can see the possible influence of Aubrey Beardsley in the lines as well. Among the best illustrations there is a celebration of the exotic, the Oriental (a particularly Viennese version of Orientalism), the theatrical, and these aspects of the illustrations are redolent of such great illustrators as Dulac, Neilsen and their ilk. In the illustrations with theatrical allusions, conjured up are the glamourous poses by the opera divas of the day, when the likes of Geraldine Farrar or Maria Jeritza could be depended on for the flamboyant gestures that fed the enthusiasm of their huge base of fans. And then there is a small selection of other images, of ships, of an Australian dough boy, of an English cottage, that underscore the versatility of this Ernest. While the full identity of "Ernest" has yet to be established, the fineness and panache of the illustrations far exceeds that of a typical amateur, and it would seem probable that the sketches might have been done for or on behalf of a fashion house or retailer, either as drafts of ideas to be executed, renderings of what designers had already done, possibly to be copied, drafts of illustrations intended for catalogues or other promotional vehicles, or some combination. It would seem unlikely, in other words, that the drawings were merely done for the amusement of the artist. The illustrations are dated, with the earliest album also bearing the title, "Modes of 1915". The existence of this title offers indirect evidence of the artist's non-avocational purpose, in our view. (Inventory #: 001976)
$7,500.00 add to cart Available from
White Fox Rare Books & Antiques
Share this item
White Fox Rare Books and Antiques
Offered by