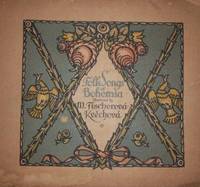 by Illustrated by Marie Fischerova-Kvechova. Translated from Czech by Raf. D. Szalatnay
Prague and New York: Printed by Koppe-Bellmann. Published by Czechoslovak Art and Craft, 1925. Paper Pastedown on Boards. Good Minus. 24 pp., with ten songs, each accompanied by a color woodblock plate that is done in a naive, folk art style and depicts picturesque scenes of Bohemian country life. The songs are presented with two to four lines of musical notation, the lyrics in English, and similar color decoration to the plates ornaments the music pages. An absolutely evocation of an idealized Bohemia just a few years after Czechoslavakia achieved independence from several centuries of Austrian Habsburg domination, and this is an expression of Czech nationalism and identity that was nurtured and defined beginning in the nineteenth century. The folk art aesthetic was also something that was cultivated, appreciated and perhaps not infrequently created whole in the nineteenth century throughout Europe, and what we see here has common attributes to other folk traditions while also having specifically Czech elements. Above all else the simple pleasures in life are celebrated, and that is something that can touch any soul. The pages are all clean but toned along the edges. Alas, the leaves are very brittle, given the acidity of the paper, and virtually all have broken off, generally neatly, from the binding along the hinges. Given the paper, it is best that the book be preserved with the pages detached but together, like a folio. The FFEP is also detached and has some minor chips along the edges, which a few other leaves have as well. The corners of the binding are a bit chewed. (Inventory #: 002021)
$50.00 add to cart Available from
White Fox Rare Books & Antiques
Share this item
White Fox Rare Books and Antiques
Offered by