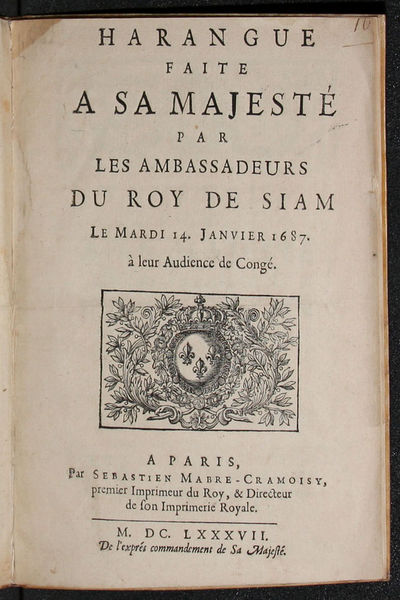 by [KOSA PAN, OK-LUANG KANLAYA RATCHAMAITRI, & OK-KHUN SISAWAN WACHA - SIAMESE AMBASSADORS TO FRANCE]
Paris: Sebastien Mabre-Cramoisy, 1687. Hardcover. Very Good. 4to - over 9¾ - 12" tall. 6 pp, [plus 1 integral blank]. Bound in old vellum, internally perfectly clean and fresh, a very good copy. Extremely rare first edition of this ephemeral pamphlet documenting the final royal audience of the Siamese embassy to France in 1686/7. The work is a formal request for permission to return to Siam - citing the King of Siam's impatience to hear of the results of the embassy as well as the prevailing winds and the season. Increasingly concerned at the Dutch predominance over Eastern trade, Phra Narai, King of Siam, succeeded in sending the first Siamsese embassy to France in 1684. The present account relates to the second such embassy (June 1686 - March 1687), whose purpose, as noted in the text here, was to secure an eternal alliance between France and Siam. For its part the newly-reorganized French Company of the Orient was delighted by these proposals, securing them valuable trade in spices and textiles. "The mission in Siam became the focus of France's activities in the East during the 1680's. Ayut'ia, King Narai's capital, became a "French Macao" for missionaries and merchants departing for and returning from the stations further to the East." (Lach & Van Kley, III: 252) The arrival of three Siamese ambassadors in northern France in the summer of 1686 caused a great deal of consternation in the popular sphere: illustrations of the embassy were frequently produced for eg almanacs of the time. The present work, printed by the Imprimerie Royale 'de l'exprés commandement de Sa Majesté', is naturally as much a testament of the might of Louis XIV as it is a faithful record of the ambassadors' visit. The 'harangue' ends with a promise to communicate the munificence of Louis and his kingdom to 'all the Orient' upon their return: "Ces Mémoires seront consacrez à la postérité, & mis en dépot entre les monumens les plus rares & les plus précieux de l'Estat. Le Roy nostre Maistre les envoyera pour présent aux Princes ses Alliez; & par là tout l'Orient sçaura bientost, & tous les siecles à venir apprendront les vertus incomparabl de Louis le Grand." OCLC records no US copies of this first (Paris) edition. The Bell Library holds a 3p Lyon imprint also dated 1687. The present speech was also published in a Latin translation, Legatorum Siamensium ad regem oratio, held only by the BnF according to OCLC. * OCLC 466051349. Cf also Lach & Van Kley, Asia in the Making of Europe. (Inventory #: 4983)
$2,250.00 add to cart Available from Martayan Lan
Share this item
Martayan Lan, Inc.
Offered by