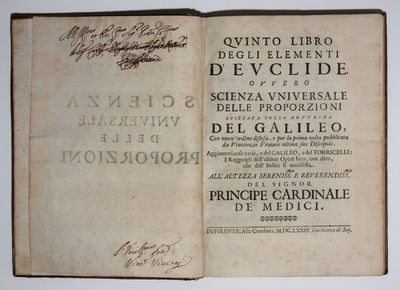 by [GALILEI, Galileo]/VIVIANI, Vincenzo
Florence: alla Condotta, 1674. Hardcover. Very Good. 4to - over 9¾ - 12" tall. [2] ff., (8), 149 pp, (3), 153-230 pp., 231-232 ff., 233-284 pp., 2 folding engraved plates. bound with [VIVIANI, Vincenzo]. Enodatio Problematum universis geometris Propositorum [.] Praemissis, horum occasione, Tentamentis Variis ad Solutionem illustris veterum Problematis De Anguli Trisectione. Florence, Gugliantini, 1677. [2] ff, (6), 63 pp., 4 folding engraved plates. With presentation inscription to verso of half-title of first work signed by Viviani. Bound in contemporary calf with spine in six compartments. A wonderfully fresh copy, light toning and foxing to one or two leaves, otherwise excellent. First complete edition (second; first 1674, see below) of this important Galileianum, an assembly of previously unpublished writings by Galileo, together with texts by Torricelli and Viviani himself, inscribed by Viviani to an unknown (scored) receipient. Vincenzo Viviani resided with Galileo at Arectri from October 1639 as his pupil, amanuensis, and assistant, and together with Torricelli, spent the last months of Galileo's life with him recording the master's final meditations on the relationship between mathematics and physics. The first chapter of this work, a dialogue entitled "Quinto Libro degli Elementi d'Euclide... spiegata colla Dottrina del Galileo" was dictated by Galileo to Torricelli in November 1641. (Galileo died January 9, 1642.) Though on his deathbed, it was to be the beginning of still another book continuing the discussion between his three old interlocutors from the Two New Sciences. In this dialogue, printed here and edited from a manuscript given to Viviani by Cardinal De' Medici, Galileo reflects upon two definitions found in Euclid's Elements, "same ratio" and "compound ratio," which were "the two most important keys taken from antiquity in creating Galileo's mathematical physics, so that his exposition of them as the last act of his scientific career reflected his earliest scientific steps at Pisa and Padua. Like the Leaning Tower affair, this dialogue linked his last days with his first; Galileo had come full circle" (Drake, p. 421). As a young man, Galileo was profoundly influenced by the Elements, especially Books Five and Six which contained the Eudoxian theory of proportion. "The importance of the Eudoxian proportion theory to Galileo's science cannot be exaggerated. Until the application of algebra to the general solution of geometrical (as well as arithmetical) problems, not achieved until after Galileo's work was completed, rigorous connection of mathematics with physical events was possible only through some theory of proportionality.... Eudoxian theory establishing proportionality between continuous magnitudes was essential to any great advance over medieval physics" (Drake, p. 4). Viviani "with the rigor and prolixity of the ancients.devoted an appendix to geometric problems, among which was one on the trisection of an angle, solved by the use of the cylindrical spiral or of a cycloid; another was the problem of duplicating the cube, solved by means of conics or of the cubic xy2 =k" (DSB). .............. (Inventory #: 4910)
$9,500.00 add to cart Available from Martayan Lan
Share this item
Martayan Lan, Inc.
Offered by