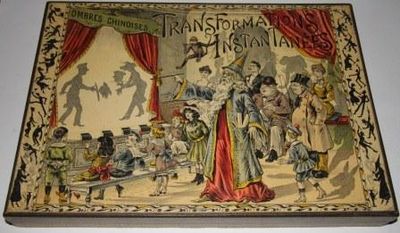 N.d., circa 1880. Ombres Chinois is a type of toy theater in which silhouette or shadows of figures move behind a scrim or screen upon which light is cast. The figures are held typically by wire or thread so as to avoid the inadvertent appearance of the manipulator's arms. This set of Ombres Chinois includes a stage and many figures, most of which are in good repair, and a fabulous outer box. No playlets are included, although they may have come with the original set. Typically with toy theater, the user, typically children, young adults and grown-ups who might have provided a hand, would be supplemented with plays and figurine pieces that would be purchased separately or perhaps made from scratch by the user. Also, the figures would generally come on a thin paper sheet, requiring the user to cut out the figures and then mount them onto a stiffer board or card, a task requiring more skill than a young child could probably manage on his own. Thus we find in this box both figures that are stiffened with card and then some that have yet to be appropriately mounted, as well as part of a sheet from which characters have already been cut out. (Inventory #: 001888)
$950.00 add to cart Available from
White Fox Rare Books & Antiques
Share this item
White Fox Rare Books and Antiques
Offered by