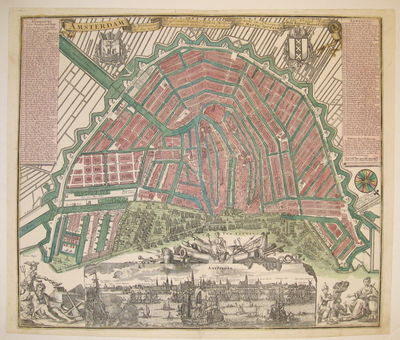 by SEUTTER, Matthaus
Nuremberg: Homann, 1739. unbound. Map. Engraving with original hand coloring. Image measures 19.5" x 22.75". In this decorative plan of Amsterdam, Seutter surrounds an aerial view of the city with a wealth of views and images. The plan at the center has streets and medieval walls clearly marked, such that the city looks like a many-pointed star with a windmill at each point. An enormous number of ships are huddled in the city's harbor, demonstrating its status as an economic world power. This scene is replicated in the panoramic view at the bottom off the map, which shows the city's waterfront and the ships of all sizes doing business there. The view is crowned with a decorative cartouche which features the city's arms surrounded by canons and other weapons that symbolize its military power. To the left are Poseidon and Hermes, who represent the city's strengths. To the right, Asian, African and American Indian figures offer their wares at the feet of the city's arms. Over 300 place names are labeled on the map and view in accordance with keys in the upper corners. Between the keys are the title, emblazoned on a scroll, and two coats of arms. As was customary for Seutter's maps and other Dutch maps of the mid-1700s, the plan has been colored and the cartouche and view left uncolored. This contemporary coloring has been left untouched, adding to the map's authenticity. It is in excellent condition with full margins and no staining. Small bookplate pasted onto verso. Matthaus Seutter the Elder (1678-1757) was an engraver, globe maker and map publisher based in Augsburg. He apprenticed with J.B. Homann in Nuremberg and, in fact, this map was likely modeled on Homann's 1725 precedent. Seutter was awarded the title of Imperial Geographer by Karl VI in 1731, and his son-in-law T.C. Lotter took over the business in 1758. This map of Amsterdam exemplifies Seutter's cartographic prowess. (Inventory #: 235985)
$2,100.00 add to cart or Buy Direct from
Argosy Book Store
Share this item

London : W.R. Royle and Son Ltd , 1976
(click for more details about Bessie)
View all from this seller>