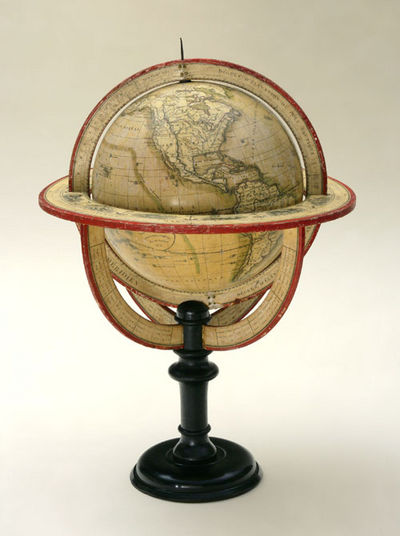 by DELAMARCHE, Felix
Paris, 1832. No Binding. Very Good. 9 ½ inches (24 cm.) diameter; 21 inches (53 cm.) total height. Single pedestal globe with horizon ring, armature & meridian all of wood, wear and staining on meridian at point where fits into stand, some chipping at extremities, else fine; globe with vibrant original color and clear, sharp patina; some abrasion & losses, mostly in lower and upper extremities; overall very good plus condition. An attractive, very capably executed table or desk globe, in the distinctive style of the Delamarche firm, "the most successful French entrepreneur[s] in maps and globes" (Dekker/ van der Krogt). This was an original work by the son, Felix, who succeeded his father in the management of the firm in 1817. The globe is geographically up-to-date, notably in the South Pacific and Alaska, with information from then recent Russian voyages, such as Krustenstern's. Related to this, at the time the globe appeared and reflected on it, Europeans were beginning to differentiate between various regions of the Pacific. These were based on a better understanding of cultural and other differences between the peoples of various areas encountered on these recent voyages. For example, in 1831 the French explorer Dumont d'Urville proposed the use of the terms "Micronesia" and "Melanesia" for various parts of the Pacific as distinguished from Polynesia. Printed dashed lines on this globe, labeled "Division Oceanique," roughly approximate the three eventually accepted divisions of what is referred to as the South Pacific, though the regions are not named on the globe. Delamarche also clearly identifies on the globe the more traditional divisions of the Pacific between "Grand Ocean Boreal," "Grand Ocean Equinoxial," and "Grand Ocean Austral." The Delamarche firm was the first to successfully reach a fairly sizable, general market of globe buyers. It accomplished this by reducing the cost of constructing globe stands and other parts, while maintaining a high level of quality in the maps of their globes, which are cleanly and attractively engraved. Traditional brass meridians were replaced by wooden ones, and the horizon rings and armatures supporting the rings were greatly simplified and made from either wood or stiff board. Also, the firm generally used simpler, single-pedestal stands rather than four-legged designs. Yet, as this well-preserved example demonstrates, Delamarche's design and materials proved to be very durable. Charles-Francois Delamarche (1740-1817), the founder of the family firm, was the successor of the great map and globemaking family, the Robert De Vaugondys, as is cited in the title of this globe. Delamarche, in fact, seemed to have cornered the globe market in France by also incorporating the stocks of Jean Fortin and Jean Lattre. Delamarche's son, Felix took over the firm upon his father's death and managed it until 1848, when Gosselin succeeded him. The firm continued well into the latter 19th century under yet another Delamarche descendent. Dekker/ Van der Krogt, Globes from the Western World, pp. 63, 74; Dekker, E. Globes at Greenwich, pp. 321-25; Suarez, T. Early Mapping of the Pacific, p. 25. (Inventory #: 10007)
$20000.00 add to cart Available from Martayan Lan
Share this item
Martayan Lan, Inc.
Offered by