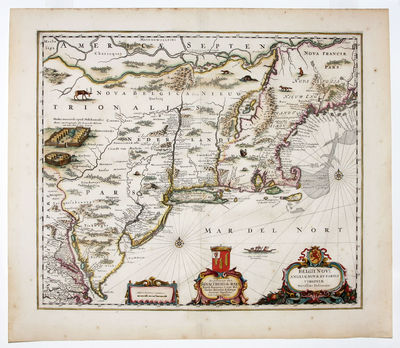 by JANSSON, J
Amsterdam, 1660. No Binding. Near Fine. 17 1/4 x 20 ¼ inches. Fine hand color; reinforced bottom of centerfold, else fine condition. A beautiful example of a cartographic cornerstone that provided the template for the mapping of the Northeast for well into the following century. It is the earliest collectible map to show the correct shapes of both Manhattan and Long Island. Several English settlements along the Connecticut shoreline appear for the first time here as do the Swedish settlements along the Delaware River. Moreover, all of the Indian tribes that were encountered by Europeans at the time can be found on the map. The map was most likely based on a large manuscript map that was used as part of a protest by New Netherlands colonists against the policies of the Dutch West India Company, the organization that sponsored the colonization of New York. The author of the manuscript is believed to have been Adrien van der Donck, a lawyer who was an early resident of New Amsterdam and who led the protest of the colonists. The map first appeared in this reduced, printed version as separate publication in 1651. As Campbell observes, "the prototype map represents Dutch elegance at its best." In addition to its decorative qualities, the map is visually suggestive of the moment in history when European colonies were only tenuously established in the Northeast with the frontier still hovering nearby. As Campbell eloquently puts it: "Indians surrounded them (the European settlements) and from the numerous native names on the map one can almost feel the pressure keeping the settlers back." Burden 305, state 2; Stokes, I.N.P. The Iconography of Manhattan, I, pp. 143-146; Campbell, T. in Tooley, R.V. The Mapping of America, pp. 279, 283. (Inventory #: 9545)
$10,500.00 add to cart Available from Martayan Lan
Share this item
Martayan Lan, Inc.
Offered by