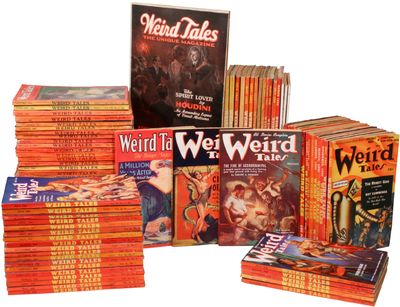 by LOVECRAFT, H.P., Robert E. Howard, Edmond Hamilton, et al.
Indianapolis / New York / London: Popular Fiction Publishing Company / Weird Tales / William C. Merrett, 1973. Near Fine. A remarkable collection of 83 beautiful issues of *Weird Tales*, containing many of H.P. Lovecraft's best known stories including "The Horror at Red Hook," "The Dunwich Horror," "The Rats in the Walls," "The Case of Charles Dexter Ward," "The Shadow over Innsmouth," "Herbert West: Reanimator," "The Outsider," "The Strange High House in the Mist," "The Whisperer in Darkness," "The Dreams in Witch poems, including those from his House," "The Haunter of the Darkness," "The Thing on the Doorstep," and many others. These issues also contain numerous Lovecraft *Fungi of Yuggoth* sequence, as well as his important essay, "Supernatural Horror in Literature." In addition, there are several contributions which were co-written or heavily edited by Lovecraft, but which do not appear under his name. And finally, these issues contain works by many other important genre writers, notably Robert E. Howard, whose contributions include the novel *Almuric* and numerous stories such as "The Lost Race" and "Pigeons from Hell." Other writers represented include Clark Ashton Smith, Edmond Hamilton, David H. Keller, Seabury Quinn, and a young Robert Bloch. Further details available upon request. (Inventory #: 376628)
$65,000.00 add to cart or Buy Direct from
Between the Covers Rare Books
Share this item

New York : Dial Press , 1967
(click for more details about The Lieutenant)
View all from this seller>