Diary of David Zeisberger, a Moravian Missionary among the Indians of Ohio 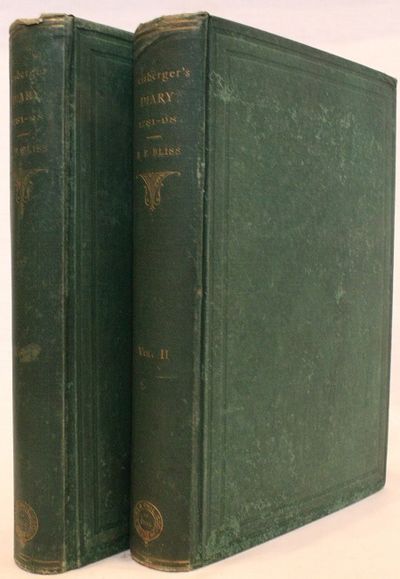 David Zeisberger was a Moravian clergyman and missionary among the Native Americans in the Thirteen Colonies. He established communities of Munsee (Lenape) converts to Christianity in the valley of the Muskingum River in Ohio; and for a time, near modern-day Amherstburg, Ontario.Zeisberger was born in Zauchtenthal, Moravia (present day Suchdol nad Odrou in the Czech Republic) and moved with his family to the newly established Moravian Christian community of Herrnhut, on the estate of Count Nicolaus Ludwig von Zinzendorf in the German Electorate of Saxony in 1727. However, when his family migrated to the newly established English colony in Georgia, Zeisberger remained in Europe to complete his education. In 1738, he came to Georgia in the United States, with the assistance of governor James Edward Oglethorpe. He later rejoined his family in the Moravian community at Savannah, Georgia. At the time, the United Brethren had begun a settlement, merely for the purpose of preaching the gospel to the Creek nation. From there he moved to Pennsylvania, and assisted at the commencment of the settlements of Nazareth and Bethlehem. In 1739, Zeisberger was influential in the development of a Moravian community in Bethlehem, Pennsylvania, and was there at its dedication on Christmas Eve 1741. Four years later, at the invitation of Hendrick Theyanoguin, he came to live among the Mohawk. He became fluent in the Onondaga language and assisted Conrad Weiser in negotiating an alliance between the English and the Iroquois in Onondaga (near present-day Syracuse, New York). Zeisberger also produced dictionaries and religious works in Iroquoian and Algonquian. Zeisberger began as a missionary to Native American peoples following his ordination as a Moravian minister in 1749. He worked among the Lenape (Delaware) of Pennsylvania, coming into conflict with British authorities over his advocacy of Natives' rights and his ongoing efforts to establish white and native Moravian communities in eastern Ohio. He was the senior missionary of the United Brethren (as the Moravians sometimes referred to themselves) among the Indians. His relations with British authorities worsened during the American Revolutionary War and in 1781 he was arrested and held at Fort Detroit. While he was imprisoned, ninety-six of his Native converts in Gnadenhutten, Ohio were brutally murdered by Pennsylvania militiamen, an event known as the Gnadenhutten Massacre. After Zeisberger was released, violent conflicts with other Native tribes and the expansion of white settlement forced many Moravian Christian settlements to relocate to present-day Michigan and Ontario. A large group of Munsee moved there in 1782, but Zeisberger later returned to live the rest of his life among the Native converts remaining near the village of Goshen (in present Goshen Township, Tuscarawas County, Ohio). Zeisberger spent a period of 62 years, excepting a few short intervals, as a missionary among the Indians. He died on November 17, 1808 at Goshen, Ohio, on the river Tuscarawas, at the age of 87 years. Zeisberger is buried in Goshen.