Studies of Chess: Containing a Poem by Sir William Jones, a Systematic Introduction to the Game; and the Whole Analysis of Chess 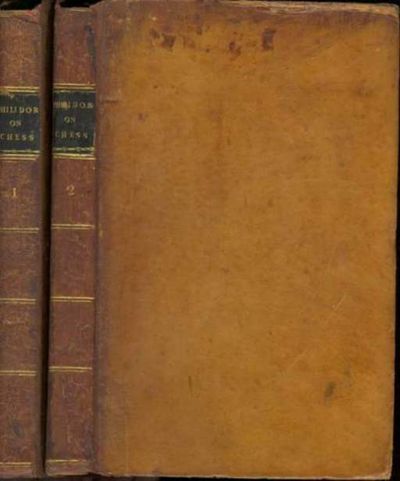 Francois-Andre Danican Philidor was born on September 7, 1726 in Dreux, France. His father Andre (1647-1730) was the keeper of the music for King Louis XIII of France. In 1725, Andre introduced the public concert. Andre had 20 children and was 79 when Francois-Andre was born. Francois was the last child of Andre and the first son of his third wife. Andre's third wife was in her 20s. In 1731 at the age of six, Francois-Andre entered the choir of the Chapel-Royal in Versailles. As a pageboy in the royal chapel, he studied music with Andre Campra. Philidor's father had died earlier and was living on a royal pension. The young Philidor was recognized as a musical prodigy among the 80 musicians.

In 1736 at the age of 10, Francois-Andre was exposed to chess by the musicians who played chess during spells of inactivity. Cards were forbidden to pass the time, so chess was played. He learned the game by watching the band members play. He later visited the Cafe de la Regence in Paris and spent much of his time playing chess there. In 1737, at the age of 11, his first music composition, a religious piece, was played before King Louis XV. He left the Chapel Royal choir in 1740 when his voice changed. In 1740 he went to Paris where he earned a living by copying music and giving music lessons. In 1741 Philidor was being instructed by M. de Kermur, Sire de Legal (1702-1792), the leading French chess player. Legal initially gave Philidor rook odds. For the next three years Kermur taught Philidor until Philidor was too strong for his teacher.

In 1744 Philidor played two chess games blindfolded simultaneously in public in Paris. He said he had learned how to do this when he could not sleep at night and played chess without sight of a board. This was the first time blindfold play against 2 opponents was recorded. This performance was chronicled in the article on chess by the Chevalier de Jaucourt for the great Encyclopedie of Diderot and D'Alembert in 1751. Philidor played chess with Voltaire and Jean-Jacques Rousseau, both persistent but weak chess players. In December, 1745, Philidor went to Rotterdam to assist in presenting concerts with Geminiani and Lanza. The musical tour involved a 13-year old girl who played the harpsichord. However, she died during the concert tour. Later, the concerts were canceled because of the girl's death and he was stranded in the Netherlands with no money. He supported himself by teaching and playing chess and Polish draughts (10 by 10 checker board), especially to English army officers at The Hague. The English officers suggested that Philidor could make a living playing chess in England. In 1747 he went to London and started playing chess at Slaughter's coffee-house. There, he beat Phillip Stamma and Sir Abraham Janssen (1720-1795), two of England's top chess players, in chess matches. Philidor challenged Stamma to a 10-game match and he stipulated that Stamma was to have White in all games and that draws were counted victories for Stamma. Philidor won 8 games, lost 1, and drew 1. He also beat Janssen with 4 wins and 1 loss. From that time on, Philidor was the unofficial champion of the world. In 1748 Philidor, age 22, returned to Holland and wrote l'analyse du jeu des Eschecs (Analysis of the Game of Chess). Philidor went out to find subscribers for the book before it was published to pay for publishing costs. Lord Sandwich subscribed to 10 copies. The Duke of Cumberland subscribed to 50 copies. The English army officers subscribed to 119 copies. The moves were written out as full sentences. In 1749 433 copies of his Analysis of Chess were published in London. Two more reprints occurred in 1749 and an English version followed in 1750. The book was the first chess book translated into Russian (1824) and was one of the favorite books of Thomas Jefferson. The book analyzed 4 games and 10 variations of games. Philidor favored the Bishop's Opening and frowned upon the King's Knight Opening as weak. The book has gone through more than 100 editions, 4 in the first year. Philidor's chess books was the first chess book that organized the openings, that explained the middlegame, the overall strategy of chess, and the importance of pawn formation. In his book he made the observation that 'Les pions sont l'ame du jeu' (the pawns are the life of the game). This phrase has become "the pawns are the soul of chess." His book was also the first to examine the R+B vs. R endgame. It also had some analysis of 1.e4 e5 2.Nf3 d6, the Philidor's Defense.

By 1750 Philidor was considered the strongest player in France, England, and the Netherlands. The French Ambassador, the Duke of Mirepoix, invited Philidor for his weekly chess dinners. In 1751 Philidor left England for Prussia, playing before King Frederick (Frederick the Great) at Potsdam. He then visited Berlin where he played 3 blindfold games simultaneously, winning them all. He then returned to England. In November 1754 he returned to France after being gone for 9 years. He started composing music again. He did not return to England until 1772. He applied unsuccessfully for the post of court composer at Versailles. A rumor had started that nobody could be a chess master and compose good music, so his church music was not really his own. His church music was not accepted by the French royalty because Philidor added an Italian influence to it, so he turned to comedy opera. In 1755 he beat Legal in a chess match at the Cafe de la Regence. On February 13, 1760, at age 33, he married Angelique Richer (1736-1809). He had 5 sons and 2 daughters with her.

Old recasing nicely done, spine ends chipped, corners bumped and rubbed, some pencil notations through out. Over all about a very good copy. (Inventory #: BOOKS004541)
$750.00 add to cart Available from Book Collector
Share this item
The Book Collector, Inc
Offered by