The Life of the Icelander Jon Olfasson: Traveller to India, Written by himself and completed about 1661 AD with a continuation, by Another Hand, up to his Death in 1679 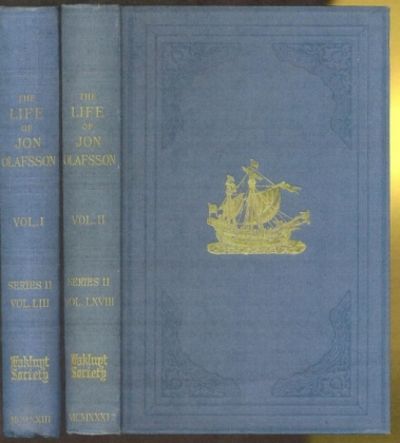 by Phillpotts, Bertha Surtees [ Dame Bertha Newall] (1877-1932) [editor]
2 volumes: xxxiv+238pp with frontispiece and 2 other plates, 3 maps of which 2 are foldouts,1 chart and index, list of works by the society at end; xxx+290pp with frontispiece and 2 other plates and index. Octavo (9" x 6") issued in blue cloth with gilt lettering to spine and pictorial representation of the ship Victoria on the cover, decorative blind stamp to covers. Translated and edited from the Icelandic edition of Sigfus Blondal by Betrtha S Phillpotts. Works issued by the Hakluyt Society, Second Series, Numbers 53 and 68. First edition.

The autobiography of Jon Olafsson, Traveler to the Indies, remained unprinted in Icelandic, save for a few excerpts, until 1908-9, when an edition by Sigfus Blondal, Librarian to the Royal Library, was published in Copenhagen by the Icelandic Literary Society. The text in this edition, which was based on a scholarly collation of the extant MMS., has been implicitly followed in the English translation. The life of Jon Olafsson falls into three parts; or perhaps more properly, since only the first two parts are written by himself, into two parts and an appendix. The first part, opening with his childhood and youth in the remote north-west of Iceland, his voyage to England in 1615, and his brief stay in that country, has for its main subject his experiences as gunner's mate in Copenhagen and on various Northern voyages, in the service of King Christian IV. It is this part which is comprised in the present volume. The second part, edited by the Hakluyt Society, deals with Jon Olafsson's voyage to India in 1622, his life as a member of the Danish garrison in the fort at Tranquebaar, and the voyage home in 1624-5, a terrible record of privation in a rudderless vessel; his stay, with other survivors, at Youghal in Ireland, and his return to Copenhagen towards the end of the year which had seen Christian IV's ill-fated entry into the Thirty Years' War. The autobiographical part ends with his return to Iceland in the Spring of 1626. It is followed by an account of the remainder of his life, probably composed by someone in the household of Magnus Magnusson, sheriff of Isafjoro, Jon's native country--possibly the sheriff himself--and ending with Jon's death in 1679, in his eighty-fifth year. This third part is of value for the full account of the raid on the Barbary corsairs on Iceland in 1627.