A Selection of Games at Chess, actually palyed by Philidor and his contemporaries; now first published from the original manuscr 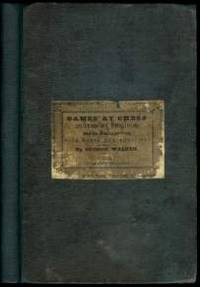 As a writer on the game, George Walker's reputation was European. His first publication, a pamphlet of twenty-four pages, on New Variations in the Muzio Gambit (1831), was followed in less than a year by his New Treatise, which gradually supplanted the chess Studiesof Peter Pratt (1803, &c.) and the far from thorough Treatise by J. H. Sarratt (1808) as amended by William Lewis in 1821; of the New Treatise a German version went through several editions. Walker's style was bright and often witty. To later editions was appended an excellent bibliography; but this has been almost entirely superseded by the Schachlitteratur of A. Van der Linde (1880). Walker's fine chess library was dispersed by Sotheby on 14 May 1874 (Westminster Papers, 1 May 1874). He was also a benefactor to the cause of chess as a founder and promoter of clubs, notably the Westminster Chess Club (1832â€"1843), famous as the battle-ground of Macdonnell and Labourdonnais, and of Popert and Staunton, and its successor in reputation, the St. George's Club, which still flourishes.