Travels in New-England and New York 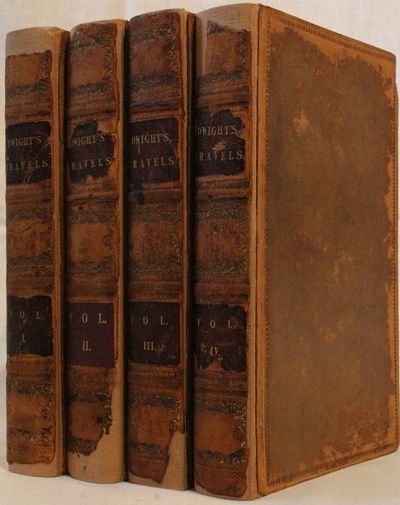 American divine, writer, and educationalist, was born at Northampton, Massachusetts, on the 14th of May 1752. His father, Timothy Dwight, a graduate of Yale College (1744), was a merchant, and his mother was the third daughter of Jonathan Edwards. He was remarkably precocious, and is said to have learned the alphabet in a single lesson, and to have been able to read the Bible before he was four years old. In 1769 he graduated at Yale College, and then for two years taught in a grammar school at New Haven. He was a tutor in Yale College from 1771 to 1777; and then, having been licensed to preach, was a chaplain for a year in a regiment of troops engaged in the War of Independence, inspiring the troops both by his sermons and by several stirring war songs, the most famous of which is Columbia. From 1778 until 1783 he lived at Northampton, studying, farming, preaching, and dabbling in politics. From 1783 until 1795 he was pastor of the Congregational church at Greenfield Hill, Connecticut, where he opened an academy which at once acquired a high reputation and attracted pupils from all parts of the Union. From 1795 until his death at Philadelphia, Pennsylvania, in January 1817, he was president of Yale College, by his remarkable ability as a teacher he taught a variety of subjects, including theology, metaphysics, logic, literature and oratory, and by his force of character and magnetic personality, won great popularity and influence, and restored that institution to the high place from which it had fallen before his appointment. President Dwight was also well known as an author. In verse he wrote an ambitious epic in eleven books, The Conquest of Canaan, finished in. 1774, but not published until 1785; a somewhat ponderous and solemn satire, The Triumph of Infidelity (1788), directed against Hume, Voltaire and others; Greenfield Hill (1794), the suggestion for which seems to have been derived from John Denhams Coopers Hill; and a number of minor poems and hymns, the best known of which is that beginning I love thy kingdom, Lord. Many of his sermons were published posthumously under the titles Theology Explained and Defended (5 volumes 1818-1819), to which a memoir of the author by his two sons, W. T. and Sereno E. Dwight, is prefixed. and Sermons by Timothy Dwight (2 volumes 1828), which had a large circulation both in the United States and in England. Probably his most important work, however, is his Travels in New England and New York (4 vols., 1821-1822), which contains much material of value concerning social and economic New England and New York during the period 1796-1817.

Spines recased with original spine laid on with some loss to extremities, spine labels chipped, corners and edges rubbed, book plate of Anson Phelps Stokes (1838-1913) on front paste down. Internally a fine set in a very good repaired binding. Due to the size and/or weight of this lot extra shipping and/or handling charges may apply. (Inventory #: BOOKS003936)
$450.00 add to cart Available from Book Collector
Share this item
The Book Collector, Inc
Offered by