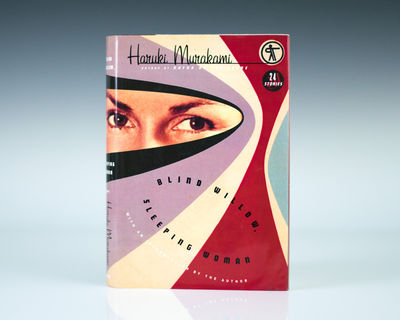 by Murakami, Haruki
New York: Alfred A Knopf, 2006. First edition of this collection of twenty-four stories by Haruki Murakami. Octavo, original half cloth. Signed by Haruki Murakami on the title page. Fine in a fine dust jacket. Jacket illustrated by Chip Kidd. Translated from the Japanese by Jay Rubin. "Everything I write is a strange tale," Haruki Murakami says in his preface to this collection. Admittedly, his fusion of Eastern and Western elements of story and reality to create a uniquely surreal landscape of human and otherworldly experiences may be a little too strange for some readers. In addition, he asks more questions than he answers about his protagonists and their unusual situations. Yet those accustomed to his weird ways will find a lot to enjoy here, including many of his most popular New Yorker pieces. While it's clear that many of the stories are sketches made in preparation for the grand artistry of his novels, most, if not all, stand very well on their own. (Inventory #: 2859)
$700.00 add to cart or Buy Direct from
Raptis Rare Books
Share this item

New York : David Mckay , 1974
(click for more details about The Killer Angels.)
View all from this seller>