Chess Studies and End-Games, Systematically Arranged, being a Complete Guide for Learners and Advanced Players 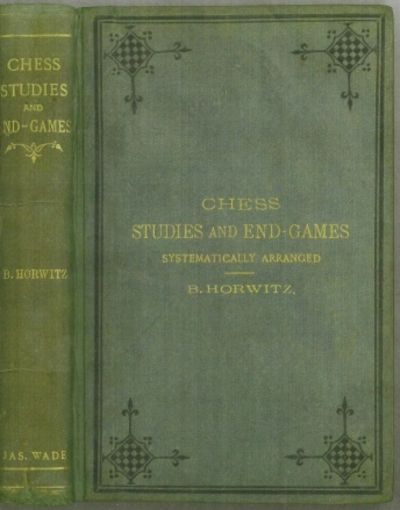 The first part is a reprint of Kling and Horwitz's Chess Studies (1851), although Kling's contribution is here unacknowledged. The second part comprises 201 miscellaneous end-game studies by Horwitz, originally composted for and published in, the Chess Monthly 1879-1883.

Bernhard Horwitz (1807-1885) was a German English chess master and chess writer. Horwitz was born in Neustrelitz, and went to school in Berlin, where he studied art. From 1837 to 1843, he was part of a group of German chess players known as "The Pleiades". He moved to London in 1845. In 1846, he lost a match against visiting master Lionel Kieseritzky, and another against Howard Staunton, losing 15.5-8.5. His best chess result was winning a match against Henry Bird in 1851. He played in the first international chess tournament, London 1851, again beating Bird in the first round, but losing to Staunton in the second and Jozsef Szen in the third. Horwitz's Chess Studies (1851), co-authored with Josef Kling, is an important work on the endgame study and endgames in general.