Original Typescript of "Tribute to a Hero" 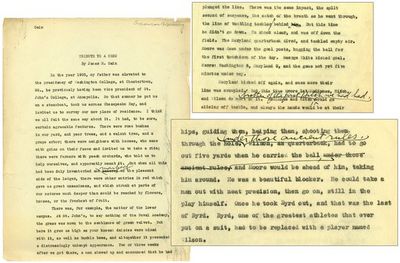 by CAIN, James M.
1933. 23 pages, carbon typescript, with approximately three dozen changes made in Cain's hand, and more than a dozen additional small variations between this text and the published version. Published in American Mercury in November 1933, "Tribute to a Hero," is an autobiographical piece about the Cain family following the father's 1903 job change from St. John's College at Annapolis to Washington College at Chestertown, MD, and the culture shock that ensued from this move to a "hick place" from one of "smartness, competence, and class," a state of affairs that was partially redeemed by the actions of "a great man" (with an assist from Cain's father) on the occasion of a Washington College-Maryland Agricultural College football game. Published the year before his first novel, The Postman Always Rings Twice (and following Our Government in 1930, nonfiction based on Cain's column for New York World). Called "one of Cain's finest essays" by David Madden in James M. Cain: Hard-Boiled Mythmaker. Carbon paper a bit yellowed, some pencil rubbing, not affecting text; near fine. An early manuscript of a boyhood epiphany by a writer who gained a place in the literary pantheon for his famous first novel, which is still considered one of the high spots of American hard-boiled fiction. No Binding. Near Fine. (Inventory #: 029577)
$2,500.00 add to cart Available from
Ken Lopez - Bookseller
Share this item