Suppose One Were A Fish [One of 26 Copies] 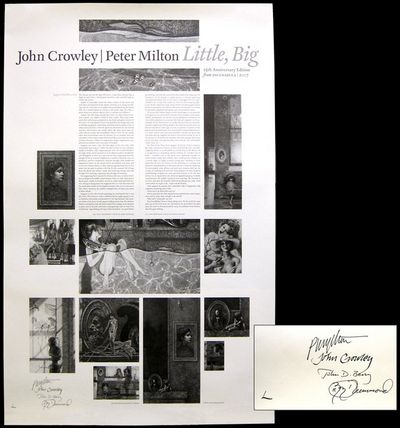 by CROWLEY, John
[Seattle]: Incunabla. 2007. The lettered limited edition of this poster, a broadside excerpt from Crowley's 1981 novel Little, Big, issued in conjunction with what was to be the 25th anniversary edition of Crowley's World Fantasy Award-winner, which is still a work-in-progress and has yet to be published. A 24" x 37" poster, with art by Peter Milton, whose haunting drawings, etchings, engravings and prints are to grace the new edition. When Little, Big was first published, Ursula Le Guin famously wrote that "all by itself it calls for a redefinition of fantasy"; Thomas Disch called it "the greatest fantasy novel ever." The literary critic Harold Bloom listed three books by John Crowley, including Little, Big, in his book The Western Canon. Bloom is listed as providing an introduction to the anniversary edition of the novel. One can get a sense, from this poster, of the aesthetic of the anniversary volume. One of 26 lettered copies, this being letter "L," signed by John Crowley, artist Peter Milton, editor John Drummond and book designer John D. Berry. Rolled; else fine. A scarce artifact of a prolonged publishing project and labor of love, associated with one of the best-loved and most highly regarded fantasy novels of all time. Unless otherwise noted, our first editions are first printings. First Edition. No Binding. Near Fine. (Inventory #: 029580)
$750.00 add to cart Available from
Ken Lopez - Bookseller
Share this item