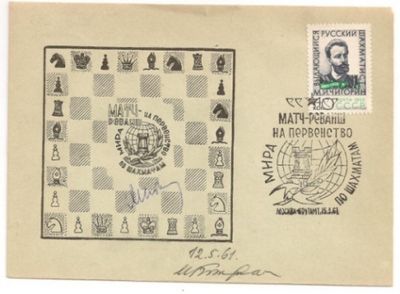 by Author: Tal, Mikhail (1936-1992) and Mikhail Moiseyevich Botvinnik (1911-1995) signed
One sheet cover with cancelled stamp and decorative chess board in black on light green paper. Commemorative cancel to stamp. Signed by both players, Mikhail Tal and Mikhail Botvinnik, in blue ink, dated by Botvinnik 12 May 1961.

Event covers are decorated, stamped and canceled commemorative envelopes. They are created to celebrate an event or note an anniversary. The design (called a "cachet") is generally placed on the left side of the envelope (although there are also "all over" cachets). It explains what is being commemorated on what date, and some times includes an illustration page. Ideally, the stamps used relate to the celebration. Cancels are either obtained in the city of the event. If a special cancellation (one with a design) has been created for the event, you can generally only receive that cancel from the local post office.

Mikhail Tal (Latvian: Mihails Tāls; Russian: Михаил Нехемьевич Таль, Michail Nechem'evič Tal, [mʲixʌˈiɫ nʲɪˈxɛmʲɪvʲit͡ɕ ˈtal]; sometimes transliterated Mihails Tals or Mihail Tal; November 9, 1936 – June 28, 1992) was a Soviet-Latvian chess Grandmaster and the eighth World Chess Champion. Widely regarded as a creative genius and the best attacking player of all time, he played in a daring, combination style. His play was known above all for improvisation and unpredictability. Every game, he once said, was as inimitable and invaluable as a poem. He was often called "Misha", a diminutive for Mikhail, and "The magician from Riga". Both The Mammoth Book of the World's Greatest Chess Games (Burgess, Nunn & Emms 2004) and Modern Chess Brilliancies (Evans 1970) include more games by Tal than any other player. Tal was also a highly regarded chess writer. He also holds the records for both the first and second longest unbeaten streaks in competitive chess history.On May 28, 1992, dying from kidney failure, he left hospital to play at the Moscow blitz tournament, where he defeated Garry Kasparov. He died one month later. The Mikhail Tal Memorial is held in Moscow each year since 2006 to honor his memory.

Mikhail Moiseyevich Botvinnik, PhD (Russian: Михаи́л Моисе́евич Ботви́нник, pronounced [mʲixaˈiɫ̺ mʌiˈs̺ʲɛjɛvʲitʃʲ bʌt̺ˈvʲin̺n̻ʲik]; August 17 [O.S. August 4] 1911 – May 5, 1995) was a Soviet and Russian International Grandmaster and three-time World Chess Champion. Working as an electrical engineer and computer scientist at the same time, he was one of the very few famous chess players who achieved distinction in another career while playing top-class competitive chess. He was also a pioneer of computer chess. Botvinnik was the first world-class player to develop within the Soviet Union (Alekhine was a top player before the Russian Revolution), putting him under political pressure but also giving him considerable influence within Soviet chess. From time to time he was accused of using that influence to his own advantage, but the evidence is unclear and some suggest he resisted attempts by Soviet officials to intimidate some of his rivals. Botvinnik also played a major role in the organization of chess, making a significant contribution to the design of the World Chess Championship system after World War II and becoming a leading member of the coaching system that enabled the Soviet Union to dominate top-class chess during that time. His famous pupils include World Champions Anatoly Karpov, Garry Kasparov and Vladimir Kramnik.

The 1961 World Chess Championship was played between former champion Mikhail Botvinnik and champion Mikhail Tal in Moscow from March 15 to May 13, 1961. Tal had unseated Botvinnik in the 1960 match, thus Botvinnik was entitled to this rematch the next year. Botvinnik, a Russian, defeated Latvian Tal to regain the world championship.

Some edge wear with the top opening being slit in very good condition. (Inventory #: C0839)
$1,000.00 add to cart Available from Book Collector
Share this item
The Book Collector, Inc
Offered by