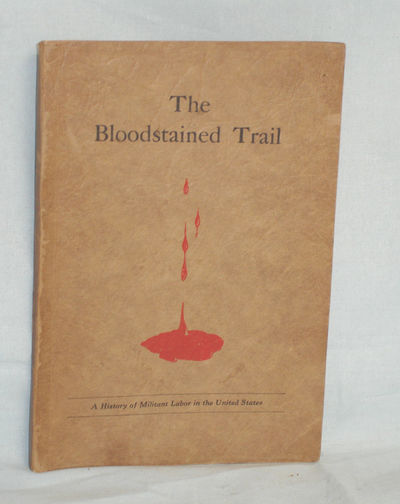 by Delaney, Ed and M.T. Rice
Seattle, (1927): The Industrial Worker. First Edition. Octavo. 172p. A History of Militant labor in the United States The labor movement from the mid-1880's to the period before World War II, was not only subject to lockouts but more frequently the hired thugs of the Pinkerton Detective Agency alongside the local police attempted to suppress any attempt of the workers to unionize. This is a systematic account of how the courts with the federal, state, and local governments were used to suppress any attempt of the workers to have protection from the greed and intimidation of the owners. Threats, mass firings, beatings and murder were all part of the arsenal used by the organized crime syndicate of the corporations. There are a number of photographs showing the victims whether on a coroner's slab, a disfigured woman, a child including men who had been tarred and feathered. Today we find virtually no physical violence done to workers since the corporations now can resort to moving to Southern states or other countries to minimize paying workers fairly. Bound in brown stiff ppaper wraps printed in black with blood dripping in red, Very minor soiling else a very good copy of a scarce item. (Inventory #: 016336)
$70.00 add to cart or Buy Direct from
ALCUIN BOOKS, ABAA
Share this item

by Feynman, Richard, Robeert B. Leighton and Matthew Sands

London; (1989) : Legend Centiury
(click for more details about Ancient Images)
View all from this seller>