Alfred's Appeal, Containing His Address to the Court of King's Bench 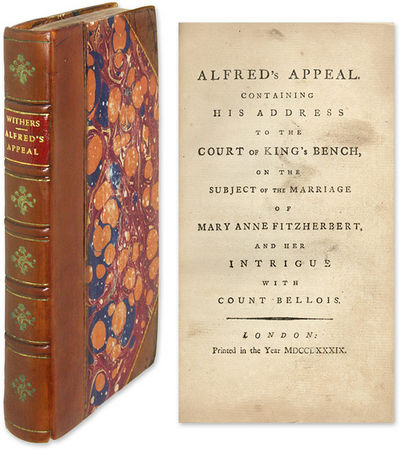 by Withers, Philip
1789. The Prince of Wales's Clandestine Marriage [Withers, Philip (d. 1790)]. Alfred's Appeal. Containing His Address to the Court of King's Bench, On the Subject of the Marriage of Mary Anne Fitzherbert, And Her Intrigue with Count Bellois. London: S.n., 1789. 88 pp. [Bound with] [Withers, Philip]. Alfred's Apology. London: Entered at Stationers-Hall, 1789. 86 pp. Half-title lacking. [And] [Withers, Philip]. Alfred's Apology, Second Part, Containing a Letter to His Royal Highness the Prince of Wales; With a Summary of the Trial of the Editor of Nemesis, On the Prosecution of Mrs. Fitzherbert, For a Libel; With Remarks, By Alfred. London: Entered at Stationers-Hall, 1789. 154 pp. [And] [Withers, Philip]. History of the Royal Malady, With Variety of Entertaining Anecdotes, To Which are Added, Strictures on the Declaration of Horne Tooke, Esq. Respecting "Her Royal Highness the Princess of Wales," Commonly Called Mrs. Fitzherbert. With Interesting Remarks on a Regency. By a Page of the Presence. London: Sold at No. 9, Queen-Street, n.d. 62 (of 64) pp. Final two leaves lacking. Octavo (8" x 4-3/4"). Stab-stitched pamphlets bound into contemporary three-quarter calf over marbled boards, rebacked in period style, raised bands, gilt ornaments and lettering piece to spine, marbled edges. Light rubbing to boards, moderate rubbing to extremities with some wear to corners, endpapers renewed. Moderate toning to text, light foxing in places, internally clean. $750. * Alfred's Apology: second edition; Others: first editions (one of several issues, all in the same year). In 1785 George, the Prince of Wales and the future King George IV contracted an illegal marriage in secret with Maria Anne Fitzherbert, a Catholic commoner. (It violated the Bill of Rights and the 1701 Act of Settlement). King George III compelled the prince to leave her in 1794 to marry Duchess Caroline of Brunswick, but he continued his relationship with her (with some periods of estrangement). These items are part of a pamphlet war that grew out of a libel trial that resulted from Withers's public exposure of the clandestine marriage. English Short-Title Catalogue T11257, T11276, T11256, T11274. (Inventory #: 61375)
$750.00 add to cart or Buy Direct from
Lawbook Exchange
Share this item

Civitas, Glouc: Ordinances, Statutes and Rules, Made and Ordained..

1635
(click for more details about Civitas, Glouc: Ordinances, Statutes and Rules, Made and Ordained..)
View all from this seller>