Eirenarcha, or of the Office of the Iustices of the Peace, In Foure Bookes. Revised, Corrected, and Enlarged, In the Fourth Yeare of the Peaceable Raigne of Our Most Gracious Queene Elizabeth ... [Bound with] The Duties of Constables, Borsholders, Tythingmen, And Such Other Lowe and Lay Ministers of the Peace. Whereunto be Adioyned, the Severall Offices of Church Ministers and Churchwardens, and Overseers for the Poore, Surveighours of the Highwaies, and Distributors of the Provision Against Noysome Fowle and Vermine. And Now Enlarged 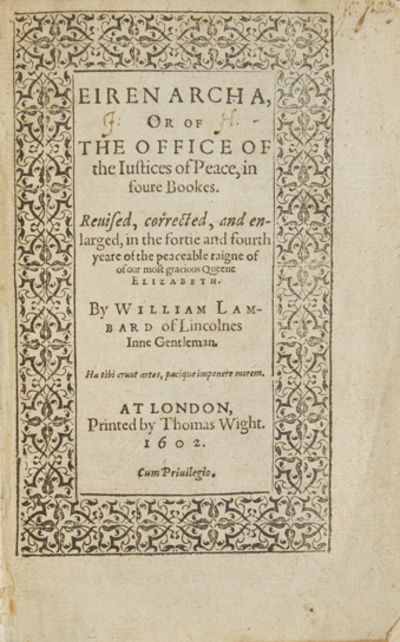 by Lambarde, William
London: Thomas Wright, 1602. Later edition of Eirenarcha (first published 1581); later edition of The Duties (first published 1583). Eirenarcha: [2], 201, 222-589, [85]; Duties: 80 pp. 1 vols. Small thick 8vo. Eighteenth-century calf, red leather spine label; rebacked, with original spine laid down; joints cracked, with some chipping and loss to foot of spine. Later edition of Eirenarcha (first published 1581); later edition of The Duties (first published 1583). Eirenarcha: [2], 201, 222-589, [85]; Duties: 80 pp. 1 vols. Small thick 8vo. Ellizabethan Law Enforcement. William Lambarde (1536-1601) was an antiquary and lawyer, who, among his many accomplishments, compiled the earliest county history, THE PERAMBULATION OF KENT (1576). His appointment as a justice of the peace for Kent in 1578, provided Lambarde with the background of experience which led to the present work; and it has long been regarded as the standard authority on the subject It is of great value not only for the study of criminal procedure in Elizabethan England; along with its companion, THE DUTIES OF CONSTABLES, it offers also a window into the society and mores of the age of Shakespeare and his Constable Dogbody.
"He [Lambarde] praised English justice, but was sharply critical of the shortcomings of the juries, which had led government to circumvent them through such agencies as Star Chamber, and thus curtail liberty. Extolling the blessings of peace and deploring the disorders attendant on war, he showed a dislike of foreigners and inveighed, among other things, against ale houses, vagabonds, and engrossers, but he made little reference to national problems and none to felony or murder." (ODNB)
Both EIRENARCHA and THE DUTIES OF CONSTABLES, were continually reprinted, updated and expanded, and the two are frequently found bound together. "Editions of this [i.e., THE DUTIES] are generally bound with editions of the Eirenarcha that are roughly contemporary, but not necessarily of the same year" (STC). Beale T 387; STC 15170, ESTC S108202; STC 15154, ESTC S103925 (Inventory #: 259203)
$1,250.00 add to cart or Buy Direct from
James Cummins Bookseller
Share this item
James Cummins Bookseller Inc.
Offered by

Up From Slavery. An Autobiography

Garden City, New York : Sun Dial Press , 1937
(click for more details about Up From Slavery. An Autobiography)
View all from this seller>