[A collection of almost all the plays, over half in first editions; also the major poetry and translations] 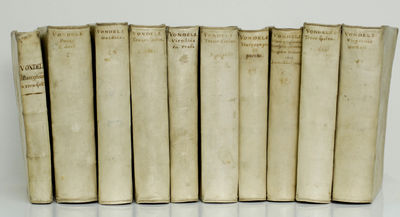 All the important the plays are collected here including Lucifer (1654)* (said to have influenced John Milton), Jeptha (1659)** (his "theatrical compass"), Adam in Ballingschap (1654), Leewendalers (a glorification of the Peace of Münster, called the most perfect drama our poet has left us.) Included are Vondel's translations of Euripides' Feniciaensche van Thebes [Phoenician Women] (1668) and Sophocles' Herkules in Trachin (The Trachiniae) (1668). Vondel's translations of the works of Ovide are collected (1671), as are his translations of Virgil in two editions (in prose, De Wees, 1646 and in verse, Visser, de Coup, et. al. after De Wees plates, 1696). Finally, there are two volumes of his collected poetry (Leonard Strik, 1683) and a number of his beautiful religious poems, including the alte Geheimenissen [Mysteries of the Altar] and Brieven der Helige Maeghden (1687).

All the works are published in quarto, most by Abraham de Wees, or, after he died, his wife Joannes de Wees with the distinctive title page engraving of bucket hanging above a well. Several of the works are illustrated with etchings by important Dutch painters and engravers: Cornelius Galle, Jan van Luykens, Abraham Bloteling (Blooteling), and others.

Full description: cut and paste to your browser the link below: