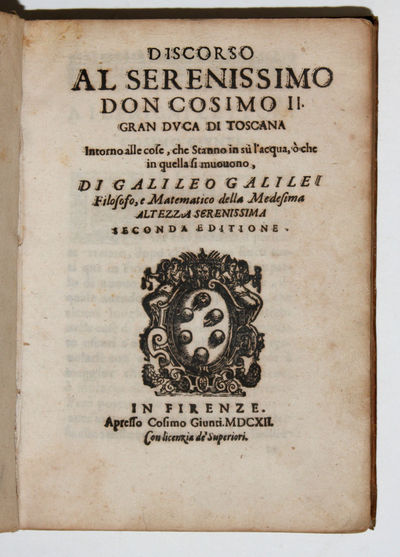 by GALILEI, Galileo
Florence: Cosimo Giunti, 1612. Hardcover. Near Fine. 4to - over 9¾ - 12" tall. (2) ff, 77 pp, (1), (1) f with printer's emblem. Bound with: [GALILEI, Galileo & CASTELLI, Benedetto]. Risposta alle Opposizioni del S. Lodovico delle Colombe, e del S. Vincenzo di Grazia... Florence, Cosimo Giunti, 1615. (1) ff, (2), 319 [ie 335] pp with numerous mispaginations, (5) including printer's emblem. Bound in contemporary limp vellum with MS title on spine, "Galileo Galilei Opera', internally very fresh, an excellent copy in all respects. A remarkable pairing of two Galileana bound together by a contemporary follower of the power struggle between Galileo and the Aristotelians. The second augmented edition of Galileo's classic on hydrostatics, published the same year within months of the first edition, represents his first published work in physics (Drake, p. 179). The Discorso is hailed by historians of science as having united for the first time two previously separate disciplines: statics and dynamics, resulting in a new science of mechanics, containing his first published statements on the concept of moment, an abstract concept of physical force which has been shown to have dominated his early physical thinking, and contains several first announcements concerning some of his great astronomical discoveries relating to sunspots, the triple form of Saturn, and the phases of Venus. The present 2nd edition contains significant additional text concerning this important concept. The Risposta, one of the scarcest of Galileo's works on the market, contains his lengthy and scathing replies to his critics only a year before his official castigation by the Catholic Church. Two years after the publication of the Sidereus Nuncius which assured his place in the history of science, and after displaying his telescopic discoveries in Rome, Galileo returned to Florence and devoted himself to the study of floating bodies, "the real, intrinsic and total cause why some bodies float and others sink." In the Discorso, Galileo supports Archimedes and opposes Aristotle on the behavior of bodies in water, arguing that the reason some solids sink is the excess of their weight over the weight of water. Employing the concept of moment- "the force with which the mover moves and the floating body resists" -and the principle of virtual velocities, Galileo far surpasses the hydrostatic considerations of Archimedes: "The new method enables Galileo to unify statics and dynamics into a new science of mechanics which became the foundation of modern physics" (Rose, The Italian Renaissance of Mathematics, p. 287). As noted above, the second edition may be distinguished from the first by the additional material contained therein; notably, Galileo drew attention to these additions by printing them in Roman type rather than Italic. Among these additions are Galileo's first announcements of the Sun's rotation period, his announcements of sunspots, and his discovery of the "horns" of Saturn. (Inventory #: 5083)
$48,000.00 add to cart Available from Martayan Lan
Share this item
Martayan Lan, Inc.
Offered by