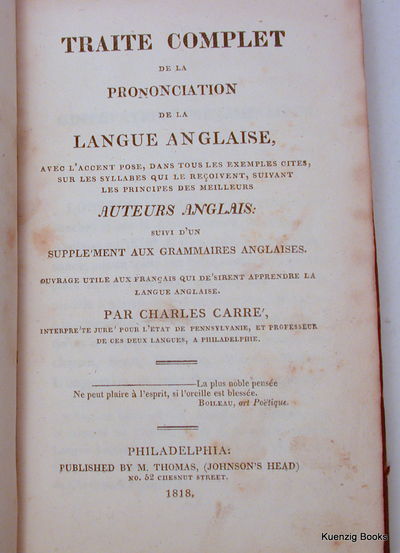 The publishers' catalogue description: "TRAITE COMPLET DE LA PRONUNCIATION DE LA LANGUE ANGLAISE, Avec I'accent pose, dans tous les exemples cites, sur les syllabes, qui le recoivent, suivans les principes des meilleurs auteurs Anglais: Suiri d'un Supplement aux Grammaires Anglaises ouvrage utile aux Francais qui desirent apprendre la langue Anglaise. Par Charles Carre.1 vol. 12mo The publisher feels confident when he recommends this little treatise to the attention of Frenchmen desirous of assistance in acquiring a correct pronunciation of the English language. Frenchmen, generally speaking, who write English perfectly well, and who maybe said, in every other respect, to be masters of it, pronounce very badly. This arises, in a great measure, from the peculiar formation of the English language, and from circumstances at first sight apparently trifling; but which, unattended to when their endeavours to attain the language begin, produce a habit afterwards not easily shaken, of laying equal stress on all the syllables composing any word. This, the most common error in pronunciation committed by Frenchmen, will, by a rnoderate degree of attention to the plan of Mr. Carre, be avoided, and the progress of the learner facilitated by the simple rules for the division of words into syllables, with a view to the governing syllable, or the one upon which stress alone ought to be laid; as also those that relate to the powers of the several vowels. The work will also be found to be remarkably free from typographical errors, which very much embarrass and impede the efforts of beginners." (from catalogue in the rear of Irving, Washington, A history of New-York, from the beginning of the world to the end of the Dutch dynasty. Philadelphia : M. Thomas, 1819)

New York : American Telephone and Telegraph Company , 1944
(click for more details about Mathematical Analysis of Random Noise [Part 1])
View all from this seller>