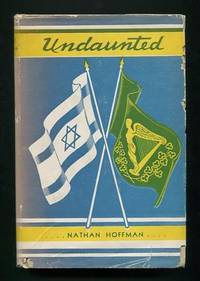 by Hoffman, Nathan
Los Angeles: Wetzel Publishing Co., Inc.. Very Good+ in Good dj. (c.1937). First Edition. Hardcover. [moderate bumping to bottom corners, otherwise a nice clean book with minimal shelfwear; jacket edgeworn (and possibly insect-nibbled along the right edge of the front panel), faded at spine, with various tiny nicks and chips]. Historical "novel of Romantic Ireland," set against the background of Ireland's struggle for independence from England in the 19th century. At first glance, the jacket illustration -- which appears to be the flag of Israel crossed with a version of the "Irish harp" flag dating back to the 17th-century Confederacy of Ireland -- seems like an utter historical dislocation, especially as Israel didn't come into existence as a sovreign nation until eleven years after this book was published! However, the rear jacket blurb begins to hint at what the author is up to, namely the task of positioning British Prime Minister Benjamin Disraeli as a champion of the cause of Irish independence. (Because he was Jewish, y'see, and as it turns out, that "Israeli" flag was actually the flag of the Zionist Movement, originally designed in 1891.) Anyway, per the blurb, Disraeli's "sympathy for the Irish cause and his great statesmanship and loyalty are important factors in the plot of this story and the author succeeds in bringing Disraeli before you as perhaps you have never known him." (I'd say that latter statement is true, especially if you've ever seen this particular statement of his: "The Irish hate our order, our civilization, our enterprising industry, our pure religion. This wild, reckless, indolent, uncertain and superstitious race have no sympathy with the English character. Their ideal of human felicity is an alternation of clannish broils and coarse idolatry. Their history describes an unbroken circle of bigotry and blood.") . (Inventory #: 19199)
$60.00 add to cart Available from ReadInk
Share this item
ReadInk
Offered by

Garden City NY : Doubleday, Doran and Company, Inc. , 1943
(click for more details about The Thorne Smith Three-Bagger: The Glorious Pool; Skin and Bones; Topper)
View all from this seller>