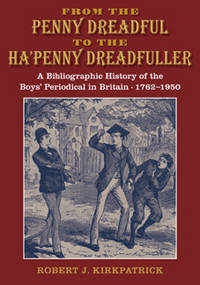 by Kirkpatrick, Robert
New Castle, Delaware: Oak Knoll Press and The British Library, 2013. hardcover, dust jacket. 6.75 x 9.5 inches. hardcover, dust jacket. 586 pages. A Bibliographic History of the Boys' Periodical in Britain, 1762 - 1950. This book tells, for the first time, the full history of the British boys' periodical, from its origins in the second half of the 18th century to its decline after the Second World War. It contains 100 black-and-white illustrations and 16 in color. Beginning with educational and religious magazines, it follows the trail through the violent and sensational 'penny blood' which thrived between around 1830 and 1870, to early attempts to entertain as well as educate boys through monthly magazines, and the ground-breaking weekly story papers and 'penny dreadfuls' of Edwin J. Brett, beginning with Boys of England in 1866, and his rivalry with the Emmett brothers and other publishers. It also looks at cheap periodical publishing for boys in America, before exploring the introduction of more 'respectable' periodicals such as the Boy's Own Paper and Chums, and the attempts of a young Alfred Harmsworth, later Lord Northcliffe and founder of the Amalgamated Press, to usurp the 'penny dreadful' by producing the 'ha'penny dreadfuller'. Finally, it charts the progress of the story paper through the first half of the 20th century, before it gave way to comics, imported American magazines, and television. It concludes with a comprehensive checklist, giving publication details of over 600 periodicals. Robert J. Kirkpatrick is the author of Bullies, Beaks and Flannelled Fools: An Annotated Bibliography of Boys School Fiction, 1742 - 2000 (privately published, 1990 and 2001) and The Encyclopaedia of Boys School Stories (Ashgate, 2000). He is a long-standing member of the Children's Books History Society, and a regular contributor to the Society's newsletter as well as to newsletters from other literary societies. In an earlier life he spent many years working as a welfare benefits adviser for a London housing association, and was the author of several books and articles on housing benefit and other social security matters. Available outside North and South America from the British Library. (Inventory #: 108513)
$85.00 add to cart or Buy Direct from Oak Knoll Books
Share this item