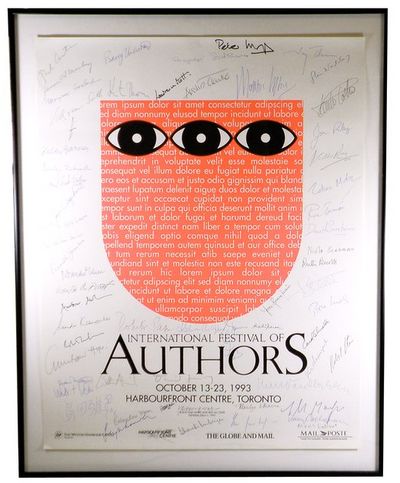 1993. Promotional poster for the annual Toronto literary festival, which each year since 1980 brought together the best writers of contemporary world literature. The poster was designed by a leading artist of the day and is one of only a handful of copies signed by all or most of the year's participants. From the collection of the promoter of the festival himself, Greg Gatenby. Designed by General Idea, a collective of three Canadian artists, two of whom died of AIDS in 1994. Approximately 61 signatures. Signed by: Paulo Coelho, William Vollmann, Jane Urquhart, Bobbie Ann Mason, Bharati Mukherjee, Aidan Mathews, Peter Levi, Marilyn Davis, Carol Shields, Ruth Rendell, Mavis Gallant, Barry Callaghan, Rose Tremain, Peter Mayle, Walter Abish, Robert Stone, Priscilla Juvelis, Paul Auster, Barry Unsworth, Rosa Lixsom, Vikram Seth, Austin Clarke, Bapsi Sidhwa, Joan Riley, Yves Beauchemin, James Mackey, Daniel Mark Epstein, and others. 17" x 22". No Binding. Fine. (Inventory #: 029749)
$1,000.00 add to cart Available from
Ken Lopez - Bookseller
Share this item

The Embassy of Cambodia

(London) : Hamish Hamilton , (2013)
(click for more details about The Embassy of Cambodia)
View all from this seller>