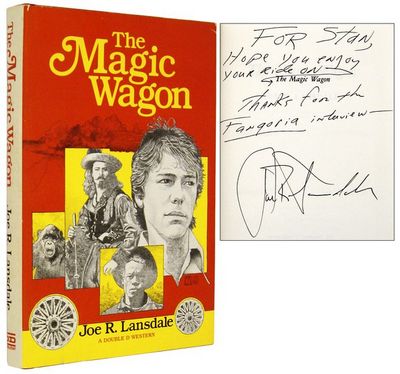 by LANSDALE, Joe R.
Garden City: Doubleday. 1986. A Double D Western set around the turn of the 20th century, and Lansdale's first book to be published in hardcover. Inscribed by Lansdale to fellow writer Stanley Wiater: "For Stan, Hope you enjoy your ride on [The Magic Wagon]. Thanks for the Fangoria interview. Joe R. Lansdale." Wiater's Gahan Wilson-designed bookplate front flyleaf; small scrape to rear board; foxing to top edge; near fine in a very near fine dust jacket with a few edge nicks. Wiater's interview with Lansdale appeared in a 1990 issue of Fangoria. A nice inscription and association, and one of the author's scarcer titles. Unless otherwise noted, our first editions are first printings. First Edition. Hardcover. Near Fine. (Inventory #: 029676)
$400.00 add to cart Available from
Ken Lopez - Bookseller
Share this item