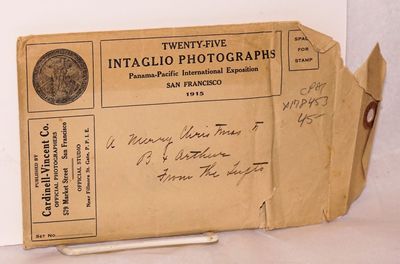 San Francisco: Cardinell-Vincent Co., Official Photographers, 1915. Photograph. Twenty-five 4x5 inch "intaglio" photos, sepia with white borders, printed on stiff slkaline cardstock. Fine unmolested prints, sound, clean and unmarked. These are enclosed in a badly worn envelope printed with the title and company information and handwritten Christmas greeting. These images are rather dreamy, kind of like Alvin Langdon Coburn on a bad day. FYI, the itaglio photo process is an old one (1820s) and appears per Google to be a sort "gravure", easier to work up than most species of gravure, and rather inferior to them. (Inventory #: 178453)
$45.00 add to cart or Buy Direct from Bolerium Books
Share this item