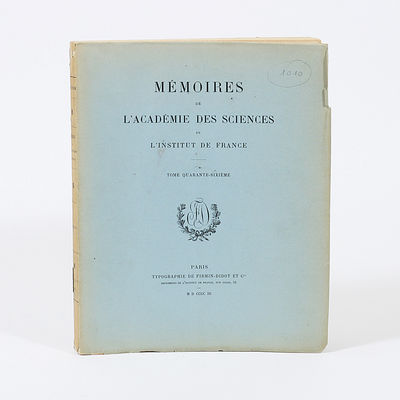 by BECQUEREL, HENRI
Paris: IN: Mémoirs de L'Académie des Sciences de L'Institut de France, Typographie de Firmin-Didot, 1903. 1st Edition. Soft cover. Very Good. FIRST EDITION of Becquerel's "definitive work", containing the full account of his investigations and discovery of radioactivity. PMM 393. Dibner 163. "In 1896, [Bequerel's] previous work was overshadowed by his discovery of the phenomenon of natural radioactivity. Following a discussion with Henri Poincaré on the radiation which had recently been discovered by Röntgen (X-rays) and which was accompanied by a type of phosphorescence in the vacuum tube, Becquerel decided to investigate whether there was any connection between X-rays and naturally occurring phosphorescence. He had inherited from his father a supply of uranium salts, which phosphoresce on exposure to light. When the salts were placed near to a photographic plate covered with opaque paper, the plate was discovered to be fogged. The phenomenon was found to be common to all the uranium salts studied and was concluded to be a property of the uranium atom. Later, Becquerel showed that the rays emitted by uranium, which for a long time were named after their discoverer, caused gases to ionize and that they differed from X-rays in that they could be deflected by electric or magnetic fields. For his discovery of spontaneous radioactivity Becquerel was awarded half of the Nobel Prize for Physics in 1903, the other half being given to Pierre and Marie Curie for their study of the Becquerel radiation" (Nobel Lectures, Physics 1901-1921).

Although Becquerel originally published most of his findings in a series of papers in Comptes rendus in 1896, "in 1903, Becquerel published the above massive volume of some three hundred and sixty pages, 'Researches into a New Property of Matter, or Radioactivity in Matter', which is his definitive work, containing a chronological narrative of his investigations, his mature conclusions and a bibliography of two hundred and fourteen treatises on radio-activity, dating from his own first paper in 1896" (Printing and the Mind of Man, 393).