On the Constitution of Atoms and Molecules (Bohr). WITH: The High-Frequency Spectra of the Elements (Moseley) 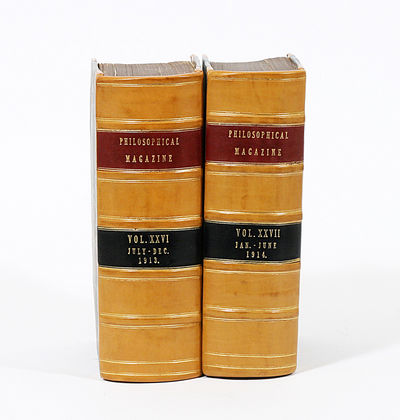 by BOHR, NIELS; MOSELEY, HENRY GWYN JEFFREYS
London: Taylor & Francis. 1st Edition. Hardcover. Very Good. FIRST EDITIONS of two critical papers in developing our understanding of the atom: 1) all three parts of Bohr's landmark work marking the definitive break from using classical physics at the atomic level, often cited as the foundation of our modern understanding of the atom; 2) both parts of Moseley's groundbreaking work providing the scientific basis for our understanding of atomic numbers and the ordering of the periodic table. PMM 407 (Moseley). BOHR: "'On the constitution of atoms and molecules' was seminally important to physics. Besides proposing a useful model of the atom, it demonstrated that events that take place on the atomic scale are quantized: that just as matter exists as atoms and particles in a state of essential graininess, so also does the process. Process is discontinuous and the 'granule' of process- of electron motions within the atom, for example- is Plank's constant. The older mechanistic physics was therefore imprecise; though a good approximation that worked for large-scale events, it failed to account for atomic subtleties… Bohr was happy to force this confrontation between the old physics and the new. He felt that it would be fruitful for physics. Because original work is inherently rebellious, his paper was not only an examination of the physical world but also a political document. It proposed, in a sense, to begin a reform movement in physics… 'On the constitution of atoms and molecules,' so proudly and bravely titled- Part I mailed to Rutherford on March 6, 1913, Parts II and III finished and published before the end of the year- would change the course of twentieth-century physics. Bohr won the 1922 Nobel Prize in Physics for the work" (Rhodes, The Making of the Atomic Bomb, 69-75). MOSELEY: "Moseley, working under Rutherford at Manchester, used the method of X-ray spectroscopy devised by the Braggs to calculate variations in the wavelength of the rays emitted by each element. These he was able to arrange in a series according to the nuclear charge of each element. Thus if the nuclear charge of hydrogen is 1, in helium it is 2, in lithium 3, and so on by regular progression to uranium at 92. These figures Moseley called atomic numbers. He pointed out that they also represented a corresponding increase in extra-nuclear electrons and that it is the number and arrangement of these electrons rather than the atomic weight that determines the properties of an element. It was now possible to base the periodic table on a firm foundation, and to state with confidence that the number of elements up to uranium is limited to 92" (Printing and the Mind of Man 407). "Moseley's fundamental discovery was a milestone in our knowledge of the constitution of the atom" (Dictionary of Scientific Biography). On the Constitution of Atoms and Molecules. Parts I-III (all published). In: The London, Edinburgh, and Dublin Philosophical Magazine, and Journal of Science. Sixth Series, Vol. 26, No. 151, pp. 1-25; No. 153, pp. 476-502; No. 155, pp. 857-75. The High-Frequency Spectra of the Elements, Parts I-II (all published). IN: The London, Edinburgh, and Dublin Philosophical Magazine. Sixth series, vol.26, no.156 (December 1913), pp.1024-1034; and Sixth series, vol.27, no.160 (April 1914), pp.703-713. London: Taylor and Francis, 1913-1914. Thick octavo, modern three-quarter calf in antique style, marbled boards. Two complete volumes: Vol. 26 (July-Dec. 1913) and Vol. 27 (Jan. - June 1914). Small corner chip to one page in Bohr paper (not affecting text), a few spots to another leaf; generally fine copies with no library stamps, very handsomely bound. (Inventory #: 1165)
$5,500.00 add to cart or Buy Direct from
Manhattan Rare Book Company
Share this item