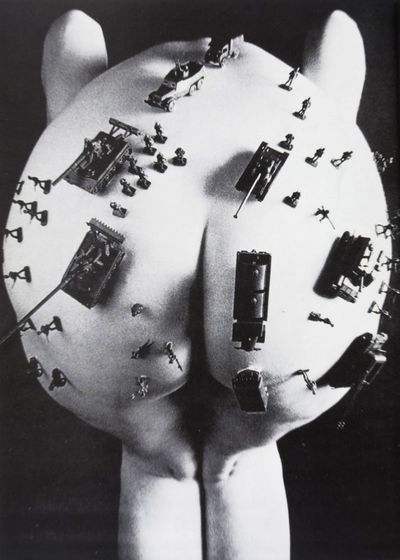 by Rambow, Gunter
Frankfurt: Kohlkunstpresse, 1968. First edition. Softcover. g- to vg. Folio (9 1/2 x 12 3/4"). Unpaginated. [200]pp. Original photo-illustrated wrappers. Profusely illustrated with reproductions of double-, and full-page b/w photographic reproductions of a woman's bare rear by Gunter Rambow. This work was privately published by Gunter and its release was possible since the sexual revolution was in full swing by 1968. The photos show the same model without ever seeing her face, always bent over which give her rear a 'moonlike' appearance. The photos were taken in a wide range of locations in Germany, some discreet, some better known such as the Kasseler Bergpark. The artist's objective was to show himself as the generous "König Immerlustik" (the perpetually happy king), who allows his 'viewers' to accompany him on this aesthetic journey focusing more on the 'effect of the surroundings' rather than the subject. This work is considered a classic by Gunter Rambow (1938-), who is a German graphic designer and photographer. He also was a professor for graphic design at the 'Gesamthochschule Kassel' and a professor for visual communication at the 'Staatlichen Hochschule für Gestaltung Karlsruhe'. No text. Minor age wear on wrappers with slight and sporadic creasing along edges, and abrasion at upper front joint and lower back joint of covers. Wrappers in overall good- to good, interior in very good condition. (Inventory #: 35102)
$650.00 add to cart or Buy Direct from
Eric Chaim Kline Bookseller
Share this item