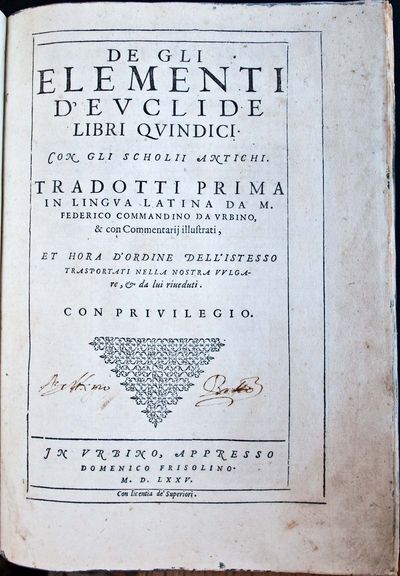 The first book printed in Urbino in the 16th century, and only the fourth overall. Urbino's presses lagged behind those of other Italian cities, due in part to Duke Federico's predilection for manuscripts. It seems Federico Commandino, the foremost mathematician of the generation before Galileo, had a press set up in his house. He hired in a printer, Domenico Frisolino, and there he published his translation into Italian of Euclid, based on his own Latin translation of 1572. Commandino died just as the sheets were coming off the press. His brother-in-law hastily attached a dedicatory letter (to Francesco Maria II della Rovere) explaining that Commandino wanted the text to be available to "all who are served by mathematics," that is, even those who do not understand classical languages. Euclid's text is glossed by Commandino's running commentary, and illustrated with figures. (Inventory #: 5476)
$2,500.00 add to cart Available from
Rare Book Studio
Share this item
Rodger Friedman Rare Book Studio
Offered by

Orlando Furioso: translated from the Italian of Lodovico Ariosto; with notes by John Hoole.

London : Printed for the author, etc. , 1783
(click for more details about Orlando Furioso: translated from the Italian of Lodovico Ariosto; with notes by John Hoole.)
View all from this seller>