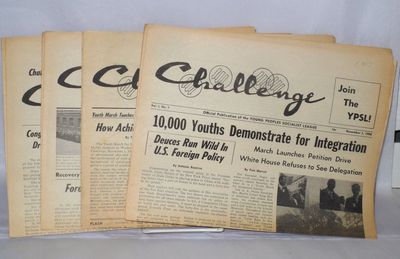 New York: Young People's Socialist League, 1959. Four issues of the newspaper, perhaps all published; vol. 1 nos. 1 and 2 and vol. 2 nos. 1 and 2; 4 pages each, tabloid format on toned newsprint. Much coverage of civil rights: Volume one, number 1 has an approximately 19 column inch story by Tom Marcel on the Saturday, October 25, 1958 "Youth March for Integrated Schools" and their failure to meet/be heard by Eisenhower... he concludes: "Washington has not seen the last of youth demonstrations. Ten thousand American youth pledged themselves ... to launch a petition campaign and to return home wuith the firm resolve to do our utmost together to help secure one million signatures... and to reconvene in Washington, D.C. on May 17, 1959 to make presentation of their petition to the Presenident, Congress and to the people of our nation." Volume One, Number 2 has another piece by Marcel, covering the same student march. In Volume Two, Number 1, Norman Hill covers the use of filibusters in the Senate and questions whether liberals can succeed in "busting the filibuster" (in general) with mention of civil rights bills being impacted by the filibuster. There is a box/story highlighting the "Youth March Petition. There is a short review of the movie "The Defiant Ones" as it relates to the negro struggle by the aforementioned Tom Marcel on the inside (page 3). Finally, Volume Two, Number 2 has the MLK 'interview' covering all of page 3. The interview consists of 3 questions addressed to King: "How does the struggle for civil rights relate to the broader social issues of the times?" "Is non-violent direct action inadequate because Negroes are a minority of the American population.?" "Does the Montgomery experience mean that negroes are being won to a principled pacifist point of view?" King's submitted response takes up most of the page where he discusses his Gandhian influence and the relationship between the movement and Labor. There is also an uncredited story on the final page of this issue headlined "The Trade Union Movement backs Civil Rights Fight. (Inventory #: 178863)
$75.00 add to cart or Buy Direct from Bolerium Books
Share this item