The rubbish tip outside the city and other stories. Translated by Dam Xuan Can 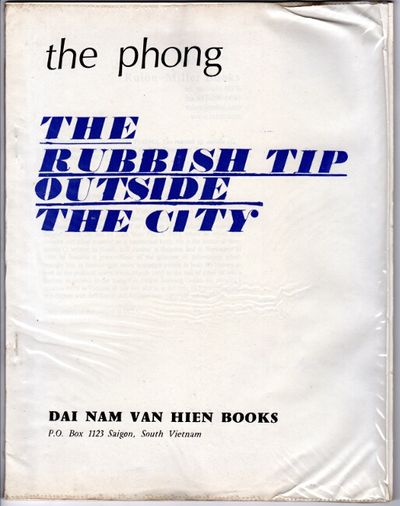 by ThÃ© Phong [i.e. Do Manh Tuong]
Saigon: Dai Nam Van Hien Books, 1971. Second edition in English, 4to, pp. 69, [4]; mimeographed; very good in original printed wrappers. Errata sheet laid in. This copy with a presentation from the author dated April, 1973. Three copies of this edition in OCLC. Short stories by The Phong, the Vietnamese poet and novelist, born in 1932, who started writing in Hanoi in 1952 "in the first days of the Vietminh." In 1953 he embarked on a career of journalism. He moved to Saigon before the fall of Dien Bien Phu in 1954 where he wrote film reviews and other material on a contractual basis. He is the author of three novels (2 written in Hanoi, and another in Saigon), and in September of 1964 he became a press officer of the Minister of Information which brought him in contact with many important people in both the literary as well as the political scene. From March 1965 to the end of 1966 he was a lecturer in politics in the Vung Tan Cadres Training Center. He remains a creative force in Vietnam to this day and is, at the time of this cataloguing, in a dispute with Jeff Bezos and Amazon over copyright infringement. (Inventory #: 34486)
$977.50 add to cart or Buy Direct from
Rulon-Miller Books
Share this item