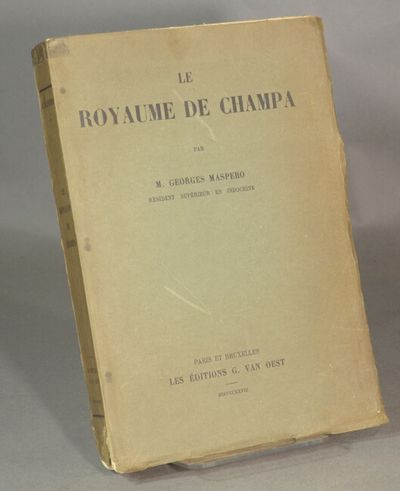 by Maspero, M. Georges
Paris & Bruxelles: Librairie Nationale d'Art et d'Histoire, G. Vanoest, Ãditeur, 1928. Large 8vo, pp. [8], 278, [1]; unopened; numerous plates throughout; original drab printed wrappers; some chipping at spine ends; modern bookseller's ticket on half title page; generally very good. Originally serialized in T'oung Pao, 1910-1913, and published in book-form in 1914. The kingdom of Champa was an Indianized kingdom that controlled what is now southern and central Vietnam from approximately the 7th century through to 1832. The Cham people are remnants of this kingdom. They speak Cham, a Malayo-Polynesian language. See Cordier, p. 2814, for the first edition. (Inventory #: 34936)
$287.50 add to cart or Buy Direct from
Rulon-Miller Books
Share this item