An authentic narrative of the loss of the American brig Commerce, wrecked on the western coast of Africa, in the month of August, 1815, with an account of the sufferings of her surviving officers and crew, who were enslaved by the wandering Arabs on the great African desert, or Zahahrah; and observations historical, geographical, &c. made during the travels of the author, while a slave to the Arabs, and in the empire of Morocco ... with a new, valuable, and interesting appendix ... Third edition 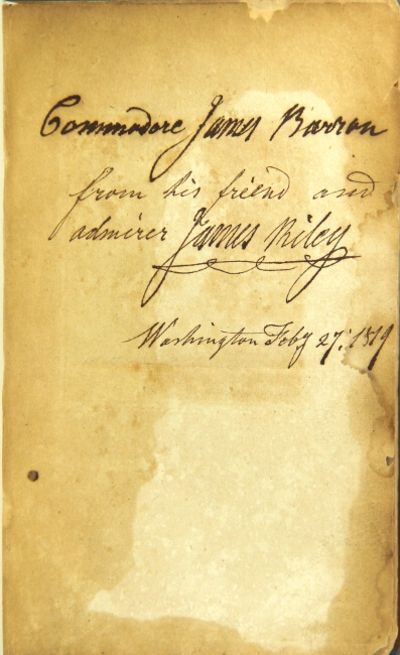 by Riley, James, Capt
New York: published by the author, 1818. 8vo, pp. xiv, [2], 407; 10 engraved plates; lacks the folding map; pp. 229-30 bound out of order and with a hole with loss to a total of 20 lines (recto and verso); frontispiece trimmed in the gutter and reinserted; the recto of the frontispiece with an interesting presentation from Riley: "Commodore James Barron from his friend and admirer James Riley, Washington Feby. 27, 1819." Bound with, as issued: Paddock, Judah. A narrative of the shipwreck of the ship Oswego, on the coast of south Barbary, and of the sufferings of the master and crew while in bondage among the Arabs... New York: published by Captain James Riley, 1818, pp. xv, [1], 186. This third edition of Riley's Narrative is the first to contain Paddock's Narrative of the Shipwreck of the Ship Oswego. Recent brown calf, black morocco on gilt-paneled spine; aside from the defects noted, a very good, sound copy. James Riley and James Barron were two of the most celebrated, skillful, and ill-starred American seamen of the 19th century. Riley (1777-1840) survived shipwreck and enslavement by the Arabs in Morocco in 1815, and in 1817 published this account of his and his shipmates' ordeal that went through many editions and became one of the most popular books of the 19th century. Abraham Lincoln called it one of his half dozen favorite books, and he was surely influenced by the book's description of white Americans enslaved and humiliated by black Moors, as well as by Riley's salute to the charity and benevolence of a Muslim. James Barron (1769-1851) was a naval officer highly regarded for his masterful seamanship. His most notable service was in the War with Tripoli, but his career was blighted and his reputation destroyed by two events: the "Chesapeake-Leopard Incident" in 1807, when Barron was forced to surrender his ill-prepared frigate to a British ship that boarded his vessel and seized alleged British deserters which lead to a court-martial and Barron's suspension without pay for five years; and Barron's fatal shooting of Commodore Stephen Decatur -- America's greatest hero of the time -- in a duel in March, 1820. Barron had spent a period of his suspension involved in commercial trading in Europe. During part of that time Riley was also traveling and trading in Europe, and it was perhaps then that the two met. In February 1819 Riley was in Washington to secure an appointment as deputy surveyor of public lands in Ohio, and Barron arrived there that month to seek -- successfully -- reinstatement in the U. S. Navy following his suspension and exile. Although both men suffered extraordinary vicissitudes during their lives, they were among the leading American celebrities of their time. Huntress 190C (Riley) and 193C (Paddock); Sabin 71397; Smith, American Travellers Abroad, P3 and R30. (Inventory #: 29419)
$1,725.00 add to cart or Buy Direct from
Rulon-Miller Books
Share this item