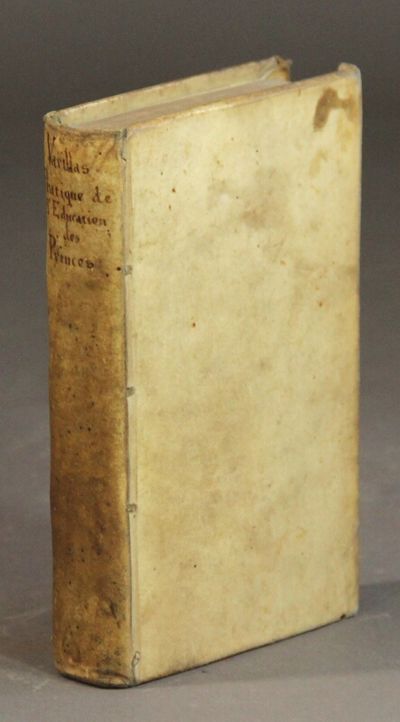 by Varillas, Monsieur
Amsterdam: H. Wetstein & H. Desbordes, 1686. 12mo, pp. [34], 407; woodcut printer's device, initials, and head- and tail-pieces; full contemporary vellum (soiled), contemporary ink manuscript spine title; several contemporary and early 18th century ownership signatures on frontfree endpaper and title page, as well as early 18th century bookplate, partially obscuring engraved title printer's device. Text block fine. Antoine Varillas (1624-1696) was a French historian, best known for his history of heresy. He was born in Guéret and made a troubled way as a man of letters in Paris. He worked as a historian for Gaston, Duke of Orléans. Then through an introduction from Pierre Dupuy he was able to have library access, leading to work on manuscripts for Jean-Baptiste Colbert. Colbert, however, was dissatisfied with his work and replaced him. Varillas enjoyed support from Pierre Huet but became a marginal figure. (Inventory #: 42549)
$345.00 add to cart or Buy Direct from
rulon-miller books
Share this item