[Seven items from the Caucus] 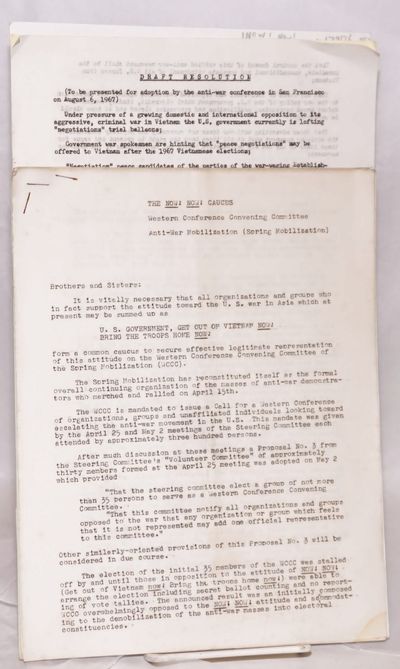 by Now! Now! Caucus; Spring Mobilization
Oakland: the Caucus, 1967. Seven mimeogreaphed items published by the Caucus headed by Robert Driscoll, one packet containing two six-page statements and three individual leaflets stapled together, as well as two separate 8.5x14 inch handbills. Some handling wear and fold creases, the packet has rusted staples and a small edge stain at lower right else generally good condition. The Spring Mobilization was a broad coalition of anti-Vietnam War groups; the Now! Now! Caucus was a group within it that took its name from the double demand, "US government, get out of Vietnam NOW!; Bring the troops home NOW!" Much content focuses on complaints of the caucus and its demands being pushed aside by the broader group through parliamentary procedure at meetings and behind-the-scenes activity. (Inventory #: 179176)
$95.00 add to cart or Buy Direct from Bolerium Books
Share this item