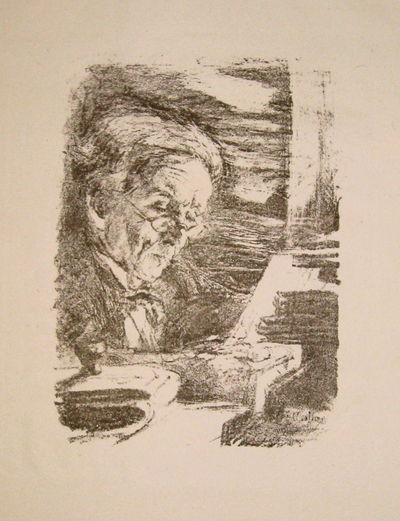 by VUILLARD, Edouard
1934. Lithograph. Trial proof of third state. Image measure 7.75 x 5.5". Sheet measures 14.75 x 10.75". This portrait by Edouard Vuillard depicts Paul Leautaud (1872-1956), a French writer and theater critic. In his concentrated pouring over a manuscript, Leautaud exemplifies the interiority for which Vuillard was famous in his paintings and drawings. Unlike his Impressionist predecessors, who often painted outdoors, the Symbolist Vuillard was more interested in domestic and private scenes. At the same time, the lithograph's subtle variations in tone and variety of drawing movements reflect the artist's career-long interest in how overall pattern could offer a more subjecting or even impressionistic interpretation of a scene or portrait. In his prints, drawings, and paintings, Vuillard paid careful attention to decoration as a way to investigate the internal dynamics inherent in such closed off and even secretive spaces. In his portrait of Leautaud, we see the author in a private moment of reading; an intimate glimpse into a man who was by all means an eccentric if not reclusive character, preferring the company of animals to people and never venturing far from his Paris home. The portrait belongs to a late period in Vuillard's career when the artist dedicated himself to the modern portrait, practicing on the various members of French society with whom he came into contact. Vuillard originally made the portrait to accompany Leautaud's autobiographical novel "Amours" when it was published in Editions Spirale in 1934. The lithograph was published in an edition of 150. The print is in excellent condition with no chips or tears. Edouard Vuillard (1868-1940) was a French painter and printmaker associated with the Nabis, a group of late 19th century artists who worked in the boundary between fine art and design. Influenced as much by the Impressionists as by Art Nouveau and Japanese printmaking, Vuillard and his artistic milieu became especially interested in advancing technologies such as color lithography, which allowed them to create a delicate balance of flatness and depth in their work. This portrait of Paul Leautaud speaks as much to Vuillard's artistic talent as it does to the central status in French culture he and his work attained in the early 20th century, a status of which he remains much deserving. (Inventory #: 243050)
$2,500.00 add to cart or Buy Direct from
Argosy Book Store
Share this item

London : Ackermann , 1808
(click for more details about West India Docks)
View all from this seller>