AN ABRIDGMENT OF BURN'S JUSTICE OF THE PEACE AND PARISH OFFICER. TO WHICH IS ADDED, AN APPENDIX, CONTAINING SOME GENERAL RULES AND DIRECTIONS NECESSARY TO BE KNOWN AND OBSERVED BY ALL JUSTICES OF THE PEACE 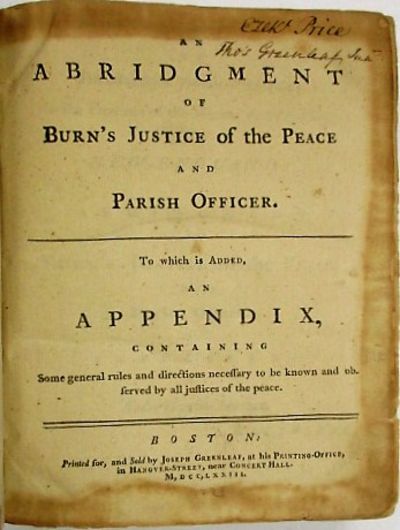 The first edition of the first abridgement of a legal treatise printed in America, and the only such abridgement published before Independence. Greenleaf explains his adaptation of the work to American conditions: "The London edition takes in the whole practice of England and Scotland, this renders it both bulky and dear. The circle of a justices business in those places is vastly extensive, and is founded chiefly on acts of the British parliament, which can never have any relation to this colony." The Appendix includes "general rules and directions" and forms for American courts.
FIRST EDITION. Evans 12702. Cohen 8325. I Harv. Law Cat. 277. Not in Sabin, Marvin, Marke, Eberstadt, Decker. (Inventory #: 30215)
$1,500.00 add to cart or Buy Direct from
David M. Lesser, Fine Antiquarian
Share this item
David M. Lesser, Fine Antiquarian Books LLC
Offered by