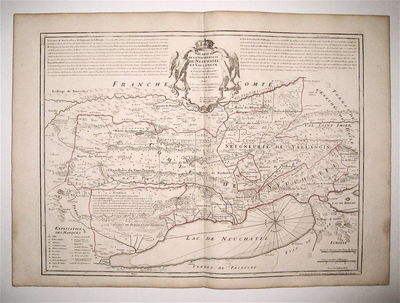 by BUACHE, Philippe and DELISLE, Guillaume
1745. Map. Engraving with hand coloring. Image measures 19 x 25.5". This beautiful map depicts the Neuchatel region of Switzerland, showing the town of Neuchatel as well as Lake Neuchatel. It is based on a 1710 original by David FranÃ§ois de Merveilleux redone by Guillaume de L'Isle and published by Philippe Buache. The map is is finely detailed with abbeys and priories, castles, battlefields, mineral springs, and forests. An elegant compass rose is shown in Lake Neuchatel, and a decorative title cartouche at the top of the map is flanked on either side by historical and geographical text in French. The map dates to the reign of Frederick I of Prussia, who presided over Neuchatel's golden age and ushered in a period of expansion in commerce, banking, and industry such as watchmaking and lace. The map is in excellent condition with wide margins as issued and no chips or tears. Minor stains in margins not affecting the image. Philippe Buache (1700--1773) was a French geographer who trained under the geographer Guillaume De L'Isle (1675--1726), a French cartographer known for his popular and accurate maps of Europe and the newly explored Americas and Africa. He is important as the first "scientific" cartographer who incorporated the most current information on exploration and topography into his maps. (Inventory #: 243006)
$475.00 add to cart or Buy Direct from
Argosy Book Store
Share this item